The Road to Dystopia

A long time ago in a galaxy far, far away, now known to us as "The 1980s," an entity called Tears for Fears sang the following lyric:

Everybody wants to rule the world.

At the time, I believed that to be not quite true. Then I found out that it is true, or mostly true, for in every person there is a drive, probably an infantile drive and in some people a relentless drive, to rule the lives of other people. For as long as totalitarian control of other people's lives is a possibility rather than just a dream, as it was for so many millennia, we will have to guard our rights, our freedoms, our humanity, and our individuality against all takers. I believe that Great Britain took a step in that direction this past week by throwing off the shackles of a distant, arbitrary, unelected, and unaccountable government designed to enrich and empower itself at the expense of the governed in Europe. It was called "Brexit." I hope to see more "-exit"s as time goes by.

In a countermove, Neil deGrasse Tyson, also an elitist and an adherent to the religion of Scientism, called for the creation of, in his words, "a virtual country: Rationalia." There have already been people calling him out on his stupidity. My advice to him is for him to read, first, history, specifically of the French Revolution and its ever-popular Russian sequel, and, second, literature, specifically We by Yevgeny Zamyatin and 1984 by George Orwell. I doubt that he would understand those things, as he appears to be a prize numbskull, but he should try at least.

For the sake of full disclosure, I had a run-in this week with one of Dr. Tyson's co-religionists. I don't know why, but I was shocked by her viciousness, her arrogance, and her bitterly contemptuous attitude towards anyone who believes in anything other than what she believes. I like her and admire her. I also feel sorry for her and wish that she were not so injured as to take the steps she has taken. I am also afraid to think that she, like countless millions of others, would gladly serve in the army of Neil deGrasse Tyson's new nation, Rationalia, and that she might very well wish to place her boot on the face of humanity, forever, so as to assuage the hurt feelings in her shrunken heart.

We went to see Independence Day: Resurgence tonight and emerged from the theater into a midsummer night. A catbird sang as daylight faded and as we talked about the movie we had just seen. It's strange that the film opened yesterday, the same day that the United Kingdom voted in favor of its own independence. I suppose that tonight Britons who love their freedom are having a whale of a party.

The saying is that there is nothing new under the sun. That's as true of movies as it is of anything. I say that to let you know that you're unlikely to see anything new in Independence Day: Resurgence (except that I don't think I have ever seen an American movie so overtly made for a Chinese audience). There are elements of Battlestar Galactica, Aliens, Starship Troopers, Star Trek: First Contact, Cloverfield, 2012, Jurassic Park (look for a chase scene with a rear-view mirror), and other movies in Independence Day: Resurgence. You might object, but that's how movies are these days. Just look at Star Wars: The Force Awakens and Star Trek Into Darkness.

There are parts of the real-life myth of flying saucers in Independence Day: Resurgence, as well, specifically, the supposed crashdown at Roswell, from sixty-nine years ago this month; Area 51, where we are supposed to have reverse-engineered alien technology, as in the movie; and J. Allen Hynek's terminology of close encounters. In short, Independence Day: Resurgence is a piece of pop-culture fluff that draws from other pop-cultural works, each with its own varying degree of fluffiness.

It also draws from fine art--or seems to. There is a white sphere with a slit in it. That looked familiar to me, and as the movie went on, I asked myself where I had seen it before tonight. Then it hit me. This (the thing on the left): 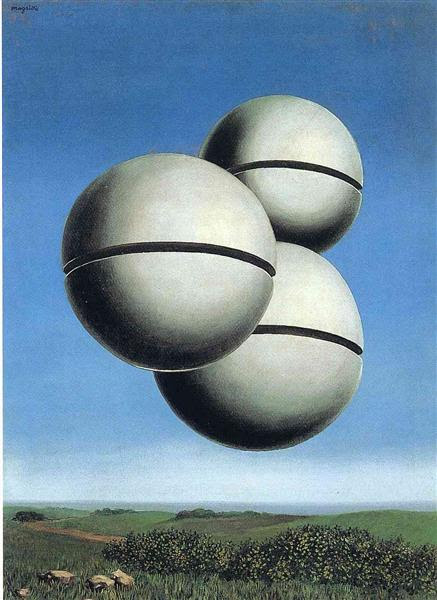 Those could easily be flying saucers. The curious thing is that they were painted before the flying saucer era. The painting is called "The Voice of the Winds" and it was executed by René Magritte in 1928. Maybe the winds of the title are solar winds. And maybe white spheres speak, as in tonight's movie.

Email ThisBlogThis!Share to TwitterShare to FacebookShare to Pinterest
Labels: Is Science Fiction Dying?

I had hoped to begin writing today a new series on Mary Wollstonecraft Shelley and her Gothic romance and proto-science fiction novel Frankenstein. The occasion is the two-hundredth anniversary of her beginning the composition of Frankenstein, supposed now to have taken place on June 16, 1816, by Lake Geneva. Here in the Midwest, we have had a cool, rainy, and stormy spring season. Mary Godwin and her companions--her future husband Percy Shelley, his friend Lord Byron, Byron's physician Dr. John Polidari, and Mary's half-sister Claire Clairmont--experienced something like that as midsummer approached in 1816. Rather than go out on excursions, they stayed in and read. They also decided on a contest to write a ghost story. Frankenstein was the most famous--and enduring--result. Unfortunately, I'm caught up in other things, so the series I had planned will have to wait. In the meantime, we can all wish the creature a happy birthday.

Captain America: The Individual vs. the Collective

We went to see Captain America: Civil War on Memorial Day. The theater was practically empty, but that's what happens when you see a movie near the end of its run. I have to say that the Avengers movies are among the best superhero movies being made and that Captain America is one of my favorite superhero movie characters. The reason is that he is truly heroic, always striving to do the right thing and not in any way morally ambiguous or morally relativistic. It's clear to me that in Captain America: Civil War we're supposed to sympathize with the title character and his cause, far more so than with Ironman and his. Before seeing the movie, I had read that there is political content in it. After seeing it, I can't say there is much of that, but if you remember just two quotes, you'll get the idea. First, in the fight scene at the airport, the Vision, a follower of Ironman, proclaims:

[F]or the collective good, you must surrender now.

Later, Captain America explains that he fights for freedom and individuality. (Unfortunately, I don't have the quote as an illustration. If somebody can come up with it, please rescue me.) So that's the casus belli: the individual vs. the collective, freedom vs. centralized control. In the real world, the collective is of course BS. ("Language!") Okay, the collective is of course poppycock. And as every person knows, we are and by rights free. (One definition of a so-called liberal is someone who loves his own freedom and hates everyone else's.) Anyway, it isn't really convincing to me that Ironman would so easily side with the collective and with centralized control. He is after all Tony Stark, a guy who does what he wants. But there is precedent in America today for big business and big industry to side with government against individual freedom. Call it crony capitalism, corporate socialism, proto-fascism, or oligarchy. Whatever its name, it represents a threat to us all. So maybe it isn't so farfetched after all that Tony Stark, like so many businesspeople in America today, would be in the tank for government control of people's lives.

So what does Captain America have to do with Weird Tales? Well, how about this: 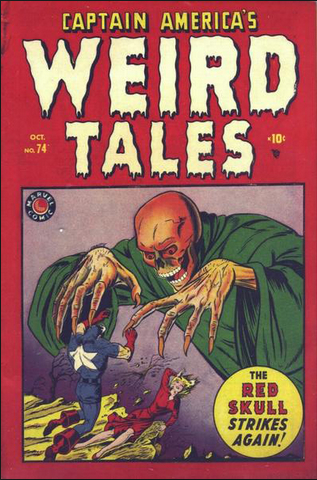 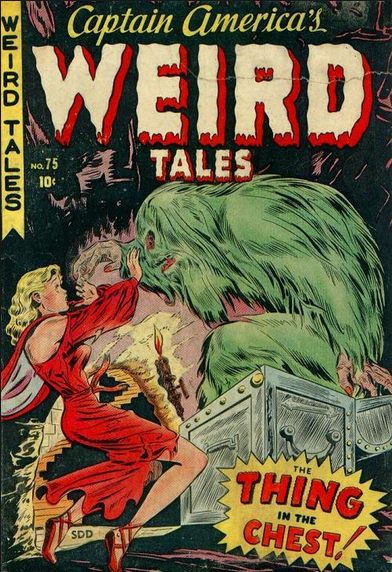 Those are the covers of the only two issues of Captain America's Weird Tales, from October 1949 (#74) and February 1950 (#75), respectively. Horror comics were very popular in the 1950s, and the pulp magazine Weird Tales still carried with it some cachet, despite the fact that pulps were on their way out after the war. I guess that explains the switch in the title. After these two issues, Captain America regained control of his own comic magazine, but only for a while: the original run of Captain America came to a close with issue number 78 in September 1954, the same month, oddly enough, that the pulp magazine Weird Tales met its end.