Today I picked up a book at a secondhand store. It's called Lost . . . and Never Found and it's by Anita Gustafson. (1) Lost . . . and Never Found is about people who have disappeared, never to be seen again. The second chapter is on the disappearance of Ambrose Bierce. I read something in that book that I have never read before. In his last letter of December 26, 1913, sent to his secretary from Chihuahua, Mexico, Bierce wrote that he was going to proceed with Pancho Villa's army to Ojinaga. From Anita Gustafson's book:

Some explanations of [Bierce's] disappearance point to his last letter, when he wrote that he was going with Villa's army to Ojinaga. The siege of that city began on January 11, 1914, and one Mexican army dispatch lists a casualty named A. Pierce. Was that Ambrose Bierce? (2, 3)

If Bierce wrote a letter on December 26, 1913, announcing some plan for immediate action, it seems pretty likely to me that he lived into the year 1914. So if the A. Pierce who died at Ojinaga was indeed Ambrose Bierce, then this month--January 2014--marks the one hundredth anniversary of his passing. There aren't many today who are  puncturing the great gasbags of our age the way Bierce did in his. We could use someone like him again. Rest in peace.

Notes
(1) Lost . . . and Never Found was published by Scholastic in 1985.
(2) p. 23.
(3) An article on the website of Marfa Public Radio says that the battle at Ojinaga was actually won on January 10, 1914. The New York Times reported fighting there on or before January 1. If Bierce died at Ojinaga, then his death may have taken place some time between January 1 and January 10. That's a big if. By the way, as everyone knows, Marfa, Texas, is home of the mysterious Marfa Lights. If, as Charles Fort suggested, someone in the great universe is collecting Ambroses, then maybe they made their approach to Mexico above Marfa and still do.

Snakes on the Cover of Weird Tales

If we were innocent in Eden, then the serpent was the first evil thing we ever saw. A fear and loathing of snakes is natural, especially in the cradles of civilization where very deadly snakes yet live. There are still people who fear--and will kill--every snake they see. Weird Tales and its writers and artists would only have exploited those feelings. I count nine covers of "The Unique Magazine" showing snakes very prominently. There are others in which snakes are bit players. I have shown all but one of these nine images before. The newcomer is for the August 1930 issue, which would also fit into a category of covers with Mesoamerican themes.

I have placed seven covers in the category of man and animal. Surprisingly, four of the animals are birds, two corvids (a crow and a raven) and two vultures. Otherwise there doesn't seem to be much of a pattern. Sometimes the animals are helpers and sometimes adversaries.

The category of woman and wolf would fit inside the category of woman and animal except that there are enough covers of the former to separate them from the latter. I think that fact alone is significant. Of the ten covers shown here, seven show the woman and the wolf as friends or companions. I would also call that significant, but I don't know in what way it is significant. Of the remaining three covers, two are of the wolf attacking or stalking the woman; the third shows the wolf as a woman. The identification of woman as wolf would seem to me merely an extension of the idea that the wolf and the woman are friends or companions. In other words, somebody--whether it's the author of weird fiction, or humanity in general--seems to be saying that the woman has some basic affinity with wolves. She runs with their pack or they run with hers. I'm still trying to puzzle it all out, and I welcome comments.

A pattern started to emerge in the previous category, which I called man, woman, and animal. The pattern is more evident in the category for today. With the man removed from the picture, it becomes clear that the relationship of woman to animal is either: a) the animal as a threat to the woman (in the same way a monster is a threat); or b) the animal as a pet, companion, or helper to the woman. The animal may even go so far as being an alternate identity for the woman or a kind of witch's familiar. We'll see more of that in the next category, woman and wolf.

Just a note to point out that I have added a new page to my blog. To see it, click on the page label "A New Magazine" (below "Home," "Weird Tales Artists," and "Weird Tales Authors") on the right or on this link.
Posted by Terence E. Hanley at 1:41 PM No comments:

Email ThisBlogThis!Share to TwitterShare to FacebookShare to Pinterest
Labels: A New Magazine

In that first wordless sequence, before men become men by discovering tools, weapons, and murder, they, as primitive anthropoids, huddle together, listening with fear in their eyes to the growling, yawping, and shrieking of unseen animals awake in the night. That fear is still with us. It's why we're afraid of the dark, why we hide under the covers and lay still, petrified in fear, when we hear strange sounds in the room, in the house, or somewhere beyond. We still fear those first animals, for we were their prey. We have also forgotten them. Our fear is an atavism. In our imaginations, we have replaced those long-ago creatures--most of which are now extinct--with monsters. As children, our monsters resemble the animals we feared when we still lived in trees, caves, and huts. They are hairy or scaly or slick. They have fangs, spikes, and claws. They creep and slither and crawl. As adults, our fear of the animal becomes a fear of the human, hence of the true monster. But if we retrace our fear, we find that the first monsters were animals. Before we knew of good and evil, we feared them. It was only after the apple that the true monster--a being with a capacity for evil--could exist in our imaginations.

In Weird Tales, the relationship of man and woman to animal is often very much like the relationship of man and woman to monster. In other words, animal and monster can be interchangeable. But the animal can also be a servant or a helper, for good or evil. Certain animals are usually symbols of evil, especially snakes. Animals are sometimes on the side of human beings and sometimes against them. The tigers in two separate images below are obvious examples. Several related categories will follow in this system of categorizing cover images. First though: man, woman, and animal. 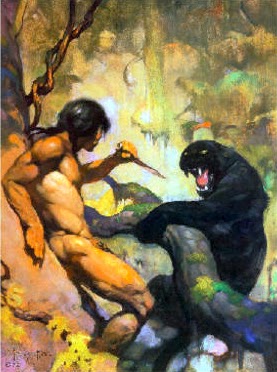