I have been reading The Cosmic Question, a British edition of the book The Eighth Tower by John A. Keel, published in 1978. (The original was published in 1975.) By a process of serendipity, my reading of this book at this moment provides a transition from my series on Star Wars to my previous series on the Fortean authors Gray Barker and Albert K. Bender. Here is a quote from The Cosmic Question (Panther Books, 1978):

The standard definition of God, 'God is light', is just a simple way of saying that God is energy. Electromagnetic energy. He is not a He but an It; a field of energy that permeates the entire universe and, perhaps, feeds off the energy generated by its component parts. (p. 21)

Keep in mind, John Keel wrote these words at least two years before Star Wars arrived on the scene, yet he used some of the same language that Obi-Wan Kenobi uses to describe the Force:

Well, the Force is what gives a Jedi his power. It's an energy field created by all living things. It surrounds us and penetrates us; it binds the galaxy together.

and that Han Solo uses in his later rebuttal (spoken to Luke Skywalker):

Kid, I've flown from one side of this galaxy to the other, and I've seen a lot of strange stuff, but I've never seen anything to make me believe that there's one all-powerful force controlling everything. There's no mystical energy field controls my destiny. It's all a lot of simple tricks and nonsense.

Now, I have never heard anyone ever say that God is light. (By the book of Genesis, God created light, and so precedes it.) I think Keel was just making that up. His point, though, is to assert that God is simply energy, electromagnetic energy that exists on an electromagnetic spectrum, in other words a continuum. That's the point of this book, too, that all energy--in other words all phenomena, including Fortean phenomena--exists on a spectrum, one that he calls and describes as the superspectrum. According to John Keel, then, all phenomena--Fortean phenomena and non-Fortean or scientific phenomena alike--are continuous. The procession of the damned shall, by this scheme, gain entry into the halls of the un-damned, and all things, which were once discontinuous, shall be continuous again. Keel, who I believe was an agnostic at best, also sought here to reduce everything supernatural to the merely material. In any case, the Fortean notion of continuity vs. discontinuity is the theme of my series on Barker and Bender, a series that will eventually go well beyond them and into the coming spring. 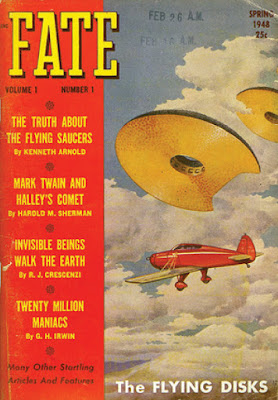