Haunted Houses and Graveyards on the Cover of Weird Tales

Today is Halloween and time for cover art showing haunted houses and graveyards. I count thirteen of them, mostly from the postwar era and more than half of them from two artists, Lee Brown Coye and Matt Fox. Again, there seems to be some significance to the fact that after World War II, popular culture returned or at least tried to return to prewar monsters, horror, and fantasy. Did it work? Maybe for a while. The again, maybe not. The war changed the world beyond any going back, despite the drive among writers of fantasy and weird fiction to return to the past or to bring the past into the present. The haunted house, a kind of ruin in which people from the past reside, and the graveyard, where the past, though never at rest, lies buried, seem to be the proper setting for weird fiction. As these covers show, they also offer the artist plenty of material for his or her picture-making. Notice, for example, that in nine of the thirteen images below there is either a bird (a vulture or a crow) or a bat.

Centaurs on the Cover of Weird Tales

While I'm on mythological subjects, I will show the two centaur covers of Weird Tales. In contrast to Medusa, these seem like pretty nice creatures.

Medusa on the Cover of Weird Tales

Before there was weird fiction, there were myths. You might call them the weird fiction of the ancient world, and in that, you might say that all of literature began with what we now call fantasy or genre fiction. So before the Christian era, its monstrous undead, and its various forces of evil, there were mythological monsters, including Medusa, a creature so frightening and horrifying that to look upon her face was to be turned to stone. Weird Tales treated Medusa on three covers from three different places and two different eras. Fifty years separated the first from the last.

Devils and Demons on the Cover of Weird Tales

This is the last week before Halloween and it's time for some subjects suited to the season. I'll start with devils and demons, the spirits that we are supposed to ward off with our wearing of costumes. I count nearly two dozen Weird Tales covers showing devils and demons, including a few from Canada (covers, not devils and demons). I have a feeling I have missed some. If I have, they will turn up eventually and I will place them here. Three--possibly four or five--of these covers show a man dressed as a devil. The others appear to be depictions of supernatural beings. The first, showing a demon lunging at two men, is genuinely frightening. Two more show Oriental-style demons. Five show a pretty conventional figure in a devil costume. One of the least conventional and one of my favorites is Virgil Finlay's devil on the cover of the April 1937 issue. That's not to take away anything from Matt Fox, a one-man demon factory, who was responsible for six of the twenty-two covers here. And I see by the cover of May 1945 that I have an addition to make to my list of Weird Tales covers featuring circles and spirals. In any case, here are the devils and demons on the cover of Weird Tales. 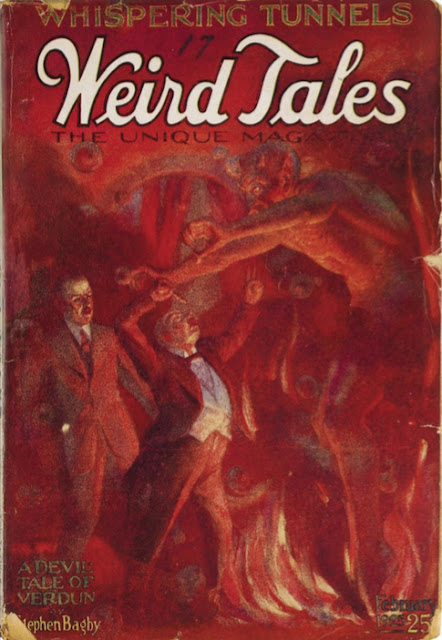 Robert Weinberg has died. As a writer, editor, publisher, fan, and collector, Mr. Weinberg did more than anyone, I think, to carry Weird Tales from the defunct era of the pulps into the 1970s and beyond. He acquired the Weird Tales property from Leo Margulies in the mid 1970s and immediately set about reviving the title and the franchise with WT 50: A Tribute to Weird Tales (1974), a self-published paperback that included material both old and new. Mr. Weinberg followed up that effort with the hardbound volume The Weird Tales Story in 1977 and a six-part serial, The Weird Tales Collector, published from 1977 to 1980. If I understand my history of the property correctly, Robert Weinberg was owner when various revivals of the magazine came about, in 1980-1983 under Lin Carter; 1984-1985 under Gordon M.D. Garb; and 1988-2010 under George H. Scithers, Darrell Schweitzer, John Gregory Betancourt, Ann VanderMeer, and Stephen H. Segal. As his health declined, Mr. Weinberg sold the Weird Tales property to Viacom, while the license to publish a magazine passed to Marvin Kaye in 2012. That is how I understand the situation anyway. Unfortunately, Weird Tales is, at this point, moribund and in need once again of revival. It is unfortunate as well that no one of Robert Weinberg's caliber as an editor, publisher, and--perhaps most importantly--fan and devotee seems to be standing ready to do what he did with Weird Tales. No one can speak for the departed, but I feel certain that Robert Weinberg would not have wanted this to happen.

As for biographical facts on Robert Weinberg: He was born on August 29, 1946, in Newark, New Jersey, in the first year of the Baby Boom and in the last decade of Weird Tales in its original run. According to the Internet Speculative Fiction Database, his first published work in a genre magazine was a letter in Robert A.W. Lowndes' Magazine of Horror in November 1965. Mr. Weinberg's first credits as magazine editor (Deeper Than You Think . . . , Jan. 1968); reviewer ("Skull-Face and Others" in Deeper Than You Think . . . , Jan. 1968); fictioneer ("Destroyer," in If, May 1969); essayist ("Some Notes on Robert E. Howard," in Return to Wonder #7, Nov./Dec. 1969); author of non-fiction (The Robert E. Howard Fantasy Biblio, 1969); and poet ("Heaven, Hell," in Return to Wonder #8, Jan./Feb./Mar. 1970) followed in rapid order. Those works began a career that lasted half a century and ended only with Robert Weinberg's death on September 25, 2016, in Oak Forest, Illinois.

I would like to thank Randal A. Everts for bringing Robert Weinberg's passing to my attention. I would also like to offer to the Weinberg family my sympathies and, on their behalf, the sympathies of everyone who dreams, writes, reads, and enjoys works of fantasy, horror, and science fiction, a field to which Robert Weinberg gave so much.

Email ThisBlogThis!Share to TwitterShare to FacebookShare to Pinterest
Labels: Editors

Authors on the Cover of Weird Tales

"Child, child--come with me--come with me to your brother's grave tonight. Come with me to the places where the young men lie whose bodies have long since been buried in the earth. Come with me where they walk and move again tonight, and you shall see your brother's face again, and hear his voice, and see again, as they march toward you from their graves, the company of young men who died, as he did, in October, speaking to you their messages of flight, of triumph, and the all-exultant darkness, telling you that all will be again as it once was."
--From "October Has Come Again" in
The Face of a Nation, Poetical Passages from the
Writings of Thomas Wolfe by Thomas Wolfe (1939)

Thomas Wolfe had a special claim on October: he was born in this most nostalgic and evocative of months in 1900, and he returned to the subject of October again and again in his writings. Wolfe's brother Ben--his closest brother--died in that same month in 1918 of the Spanish Flu, a disease that killed more people worldwide than the Great War that had waged before it. Nearly one hundred Octobers have passed since then. Now summer is gone and October has come again, as Wolfe chanted in the passage from which the quote above is taken. This is the season of cut corn and apple cider, of woodsmoke and leaves aflame, of pumpkins, apples, squash, and remembrance. The world and life will come 'round again, but for now, plants retreat into seed, root, and rosette, insects into egg, pupa, and diapause, small animals into their burrows and dens, and we into sweaters, home, memory, and hope.

Edgar Allan Poe died in October. The anniversary of his death--October 7--just passed. Harry Houdini died in October, too, fittingly on Halloween 1926, ninety years ago this month. Those two men were the only authors of whom I am aware who appeared in both name and figure on the cover of Weird Tales. The faces of two artist/authors were on Weird Tales: Virgil Finlay and Hannes Bok created self-portraits in two covers respectively. The last cover shown here from the original run of Weird Tales is less certain to fall into the category of authors on the cover of the magazine. I have included it here only as a possibility. Finally, there is the cover of the Fall 1984 issue of Weird Tales, created by Ro H. Kim with Brinke Stevens as his model. So, two named authors, two self-portraits, a modeled portrait, and an uncertainty. Those make the authors on the cover of Weird Tales from 1923 to 1985.