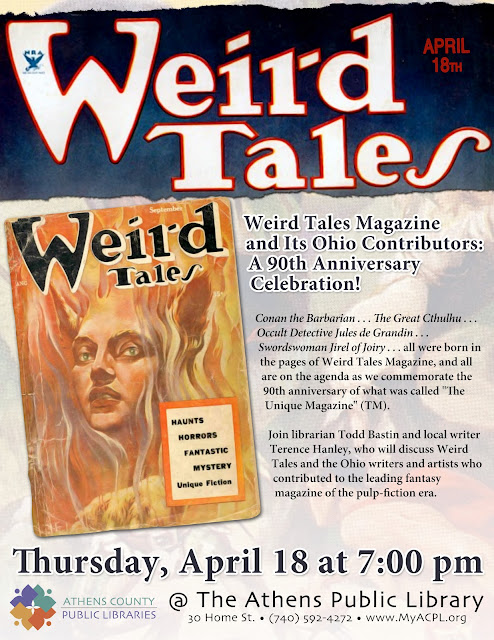 Tonight at the Athens County Library in Athens, Ohio, I will talk about Weird Tales, pulp fiction, and the authors and artists who contributed to "The Unique Magazine." All are welcome and the talk is free.

Email ThisBlogThis!Share to TwitterShare to FacebookShare to Pinterest
Labels: Weird Tales in Ohio


John Ulrich Giesy was born on August 6, 1877, near Chillicothe, Ohio, the only son of two Ohio natives and a great-grandson of a Pennsylvania private of the Revolutionary War. The Giesy family did not remain long in Ohio after John's birth. The 1880 Federal census found them in Richland, Kansas, where the boy's father was a farmer. By 1900, the family was in Salt Lake City, and at age twenty-one, John U. Giesy was already employed as a physician. (He was an 1898 graduate of Starling Medical College in Columbus, Ohio.) (1) It appears as though Giesy lived in Salt Lake City for most of his adult life except for his wedding in San Francisco in 1904 and four months spent in the Medical Corps at Fort Riley, Kansas, at the close of the First World War. (2)

Like Edgar Rice Burroughs (and James Fenimore Cooper before them), Giesy began his literary career after remarking that he could write as well or better than the authors he was reading. His wife encouraged him to do so, and so he began selling stories to Western Monthly in 1910. His story "The Occult Detector" appeared in The Cavalier in February 1912. It was the first in a series starring Semi-Dual, an occult detective. It's worth noting that William Hope Hodgson's tales of Carnacki, the Ghost-Finder, are from shortly before that date. Many more Semi-Dual stories followed over the next two decades and were published in The Cavalier, All-Story Weekly, and other magazines.

Giesy may or may not have followed the example of William Hope Hodgson in his Semi-Dual series. There can be little doubt that Giesy's three interplanetary novels of Jason Croft (All-Story, 1918-1921) were inspired by Edgar Rice Burroughs and his Mars books. (3) The Jason Croft stories proved popular enough that they were reprinted in Famous Fantastic Mysteries in the 1940s, then by Avalon Books in the 1960s.

A third series by J.U. Giesy starred Professor Xenophon Xerxes Zapt and earned Giesy a place on the cover of Weird Tales in October 1925. The title of Giesy's opus is "The Wicked Flea." The cover illustration shows a giant flea chasing a frightened dog. I suppose that was an attempt at humor. Fantasy fans are notoriously serious-minded. I suspect there were a few readers of Weird Tales who objected. I may be a little more forgiving, but it's hard for me to imagine that there wasn't a better subject for the cover of that issue of Weird Tales.

Giesy sometimes collaborated with other authors, especially lawyer Junius B. Smith, whom he met in Salt Lake City. (Octavus Roy Cohen was another Giesy collaborator.) A website called PulpGen, which combines pulps and genealogy, lists Giesy's many writing credits. It's a website well worth a look. That site is linked through another, Science Fiction/Fantasy Authors of Various Faiths, to a Wikipedia entry on Giesy. According to the Various Faiths website, Giesy was "[o]ne of the few s.f. authors who wrote in Esperanto." Giesy is included in the section on Latter-day Saints [sic] despite the fact that his religious affiliation is "unverified." According to an entry on the website of The Encyclopedia of Science Fiction, Giesy also expressed "a devout belief in astrology" in his Professor Zapt series. (4)

Two of Giesy's stories are worth special mention here. The first, In 2112 (1912), is a Utopian novel of two hundred years in the future. That's still one hundred years from our own times, but I suspect that in 2112 we will once again miss Utopia by the same margin Utopia is always missed, i.e., by an infinite number of years. Second is All For His Country (1914, 1915), a novel of future war in which the Japanese destroy Los Angeles and Japanese-Americans in California betray their country. Wikipedia repeats a charge of racism (without citation or attribution) and links the novel in some way to the internment of the Nisei during World War II. We should probably be a little more responsible than that. The Encyclopedia of Science Fiction is more neutral and merely makes reference to "the yellow peril" in its entry on Giesy. (5)

Six of J.U. Giesy's stories were committed to film between 1916 and 1921. Chief among those are The Matrimaniac (1916), a comedy starring Douglas Fairbanks, and The Eyes of Mystery (1918), directed by Tod Browning. You can find a full list of Giesy's movie credits at the website of The Internet Movie Database.

After a lifetime spent in dual careers, John Ulrich Giesy died on September 8, 1947, in Salt Lake City. He was survived by his wife, Juliet Galena Conwell Giesy (1877-1953), and was buried at Mount Olivet Cemetery in his adopted home city.

Further Reading
See the sources cited above. You can read more about Giesy in Under the Moons of Mars (1970), edited by Sam Moskowitz. Unfortunately, Moskowitz's biographical sketch, in which Giesy is identified as "James Ullrich Giesy," must be taken with a grain of salt. Also, there is a brief entry on Giesy in Ohio Authors and Their Books, 1796-1950 (1962), edited by William Coyle.

Notes
(1) Starling Medical College is now part of Ohio State University. According to Sam Moskowitz, Giesy arrived with his family in Salt Lake City at age thirteen. He also served his medical internship in that city.
(2) I'm not quite sure about Giesy's military career. According to public records, he served as a captain in the U.S. Army between August and December 1918. Sam Moskowitz wrote that Giesy organized an Army camp, Plattsburg Training Camp, in Salt Lake City in 1916, and that he served in the reserves as a major after the war. As for his civilian medical career, Giesy was editor of two journals, California and Western Medicine and Archives of Physical Therapy, X-Ray, and Radium.
(3) By the way, J.U. Giesy (1877-1947) and Edgar Rice Burroughs (1875-1950) were very near contemporaries.
(4) Giesy, who wrote adventure, mystery, romance, science fantasy, and Westerns, also used the pen names Jay Ulrich and Charles Dustin.
(5) By the way, the term "the yellow peril" was coined by Kaiser Wilhelm II. Writers of popular fiction quickly glommed onto the term for their own usage. Also by the way, gialli--literally, "yellows," named for their yellow covers--are an Italian genre encompassing crime fiction, thrillers, and what we might call weird terror or weird menace tales. And of course, The Yellow Kid and so-called "yellow journalism" date from about the same period as the first usage of the term "the yellow peril." So do yellow pencils, which have their own connection with what used to be called the Orient. So what is it with the color yellow? Coincidentally and inconsequentially, Richard Outcault, creator of The Yellow Kid, and William S. Giesy, father of J.U. Giesy, both hailed from Lancaster, Ohio. 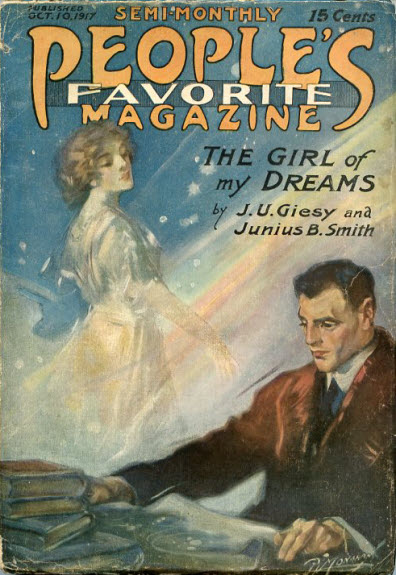 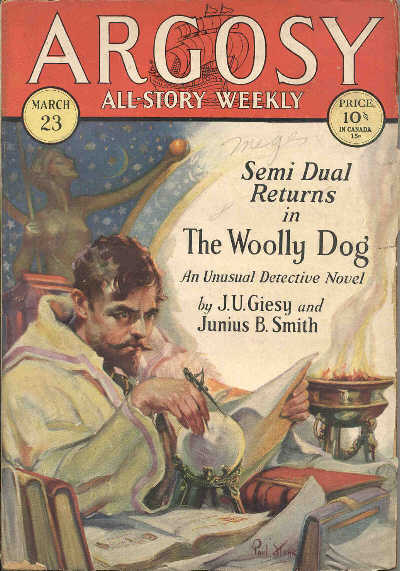 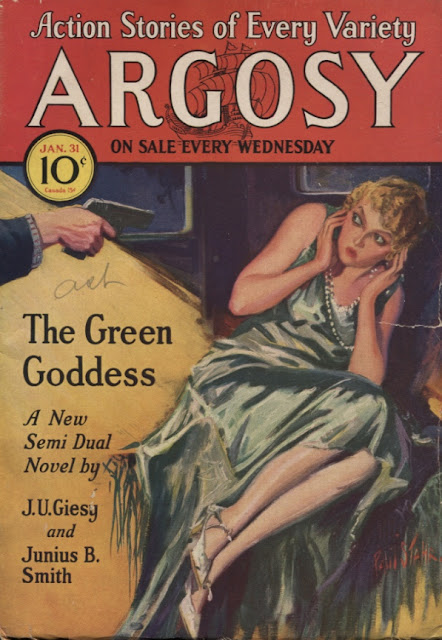 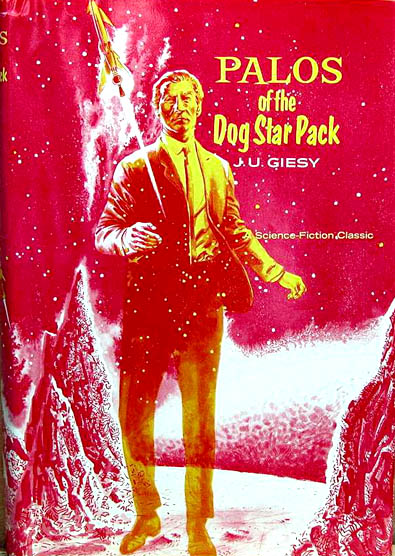 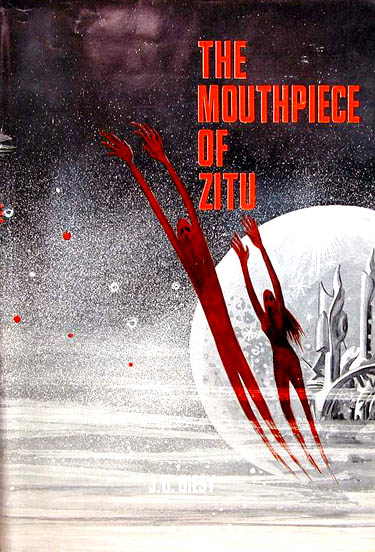 In observance of the 90th anniversary of the first issue of Weird Tales, I will be presenting a talk on Thursday, April 18, 2013, at the Athens County Public Library in Athens, Ohio. The talk is scheduled for 7 p.m. and will last an hour. Here is a link to the library's website:

If you have questions, please write to me at: