I'll have to begin again with a question of names. In his first issue of a revived Weird Tales, Sam Moskowitz credited one of his authors as "Nathaniel T. Babcock." That credit seems to have come from Munsey's in 1892 and perhaps also from The Argosy in 1896. We now know that the author's real name was Nathaniel P. Babcock. In any case, one of the reasons for doing research is to correct mistakes made by previous researchers. I have received frequent corrections from readers of this blog. Although I haven't made all those corrections yet, I hope to get to them and I hope that you'll continue to send them in.

Nathaniel P. Babcock, by my best guess, was born on December 28, 1851, in New York City. (1) He may have been related to an old and prominent New England family named Babcock, but I have been unable to confirm that. H.P. Lovecraft must have known the Babcock name, for he used it in "A Shadow Over Innsmouth" (1936). Lovecraft's own family may have been related to the Babcock family as well through the Whipple line.

Babcock was a newspaperman. His obituary in the New York Times (Feb. 16, 1928, p. 3) states that he had worked in the newspaper business for fifty-three years, first with the New York Tribune, then with the World, the American, and with the Hearst syndicates. His story, "The Man with the Brown Beard," was published in Munsey's in January 1892 and in The Argosy in February 1896. That was the story Moskowitz used in Weird Tales. Babcock also contributed to The Century, The Junior Munsey, Ladies' Home Journal, The Saturday Evening Post, and St. Nicholas Magazine between 1886 and 1903.

Babcock married a woman from Somerset, Ohio. At least one of his children was born in Zanesville. That would explain his connection to the Buckeye State. In February 1928, Babcock returned from Europe with his wife and daughter. Eleven days later, he died in a hospital in Zanesville. He was seventy-six years old.

Forty-five years after that, Sam Moskowitz placed his story, "The Man with the Brown Beard," in his new Weird Tales and in his paperback anthology, Horrors in Hiding. Evidently it had proved elusive: despite the fact that "The Man with the Brown Beard" was the first--chronologically--of the stories listed in the first comprehensive index of fantasy in the Munsey periodicals (2), it had never before been reprinted. Moskowitz corrected the oversight, calling Babcock's story a "powerful tale of horror."

Nathaniel P. Babcock's Story in Weird Tales
"The Man with the Brown Beard" (Summer 1973, originally in The Argosy, Feb. 1896)

Notes
(1) I have seen birthdates of February 1852 and December 1853 as well. If the 1860 census is accurate, then the 1853 birthdate cannot be. Two sources indicate a birthdate in December--two (for December) against one (for February) leaves December 28, 1851, as the most likely date in my mind.
(2) The index, "Fantasy in the Munsey Periodicals" by William H. Evans, was serialized in Fantasy Commentator, a fanzine, in 1946-1947. 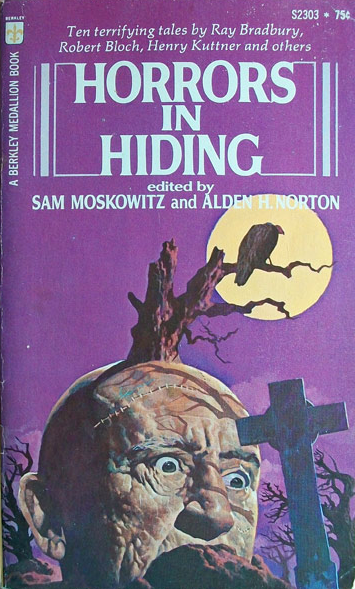