I have a book called Great Tales of Terror and the Supernatural, published in 1944 by Random House, an American firm based in New York. The publishers were Bennett A. Cerf, Donald S. Klopfer, and Robert K. Haas, all Americans and all born in New York. The two editors of the book were Herbert A. Wise (Cerf's uncle) and Phyllis Fraser (Cerf's wife). They were also Americans. The editors selected fifty-two tales by forty-three authors for inclusion in their anthology. (One story has two co-authors. Ten authors have two stories each.) Of those forty-three authors, twenty-two were British, plus one Armenian-British author (Michael Arlen). Two were French, two were Irish (one of whom was the Irish-American writer Fitz-James O'Brien), one was Danish, and one was German. The balance--fourteen authors--were Americans. Of those dozen-plus-two, most were and are well known: Edgar Allan Poe, Nathaniel Hawthorne, Ambrose Bierce, Henry James, F. Marion Crawford, O. Henry, Edith Wharton, Conrad Aiken, Alexander Woollcott, William Faulkner, and Ernest Hemingway. The last two of course won Nobel Prizes not long after this collection was published. That leaves just three lesser-known American authors: Richard Connell, who is known for just one story, "The Most Dangerous Game"; Edward Lucas White, author of "Lukundoo"; and H.P. Lovecraft, who placed two tales in this collection, "The Rats in the Walls" and "The Dunwich Horror." (The last three stories by the way came from Weird Tales.) Readers of Great Tales of Terror and the Supernatural would probably have been unfamiliar with White and Lovecraft, coming as they did from the pulps. The editors kindly wrote a lengthy introduction to Lovecraft's two tales, which close the book. They refer to "The Dunwich Horror" as a "splendid story." I agree.

I haven't read all the stories in Great Tales of Terror and the Supernatural. I'm certain that the editors had good reason to include the stories and authors they did. But were they biased? A larger question: Are publishers, editors, critics, readers, and academia in general biased in favor of British writers when it comes to fantasy? Is there a bias in favor of more "literary" stories or stories from well known authors, especially from the past? Is there an equal bias against pulp fiction and pulp authors or new fiction and new authors? Is there a bias in favor of a specific kind of fantasy and against certain others? The Hobbit is a heroic quest, an Odyssey across Middle Earth. It's a kind of tale as old as literature itself. It also contains elements of a fairy tale, a genre that is also quite old, dating as it does from early in our own childhood. "The Call of Cthulhu" or "At the Mountains of Madness" is something else. Both are also quests, but they are set in the present. More importantly, there isn't any magic, for in the twentieth century science slew magic. Lovecraft's science-fantasy stories may have had precedent in the fiction of Edgar Allan Poe and other nineteenth century authors, but if you think about it, they were startling innovations.

Do we then favor the traditional story: the heroic quest, the fairy tale, the ghost story, the Gothic romance, the Utopian novel? Is there opposition to innovation in fantasy fiction--against science-fantasy and science fiction, against a tale set in the present or in the future, on some other planet or in another dimension? Does the general readership favor tales that look to the past while dismissing tales that border on science fiction? I think most people would feel unembarrassed if you found them reading a ghost story or even The Hobbit. But what if they were discovered reading science fiction or--horrors!--a pulp magazine? How would they react to that? With shame and embarrassment? I don't know. In any case, there is even today a stigma attached to certain kinds of fantasy. It's why decades ago Judith Merril started calling science fiction "speculative fiction" or "SF." (2) It's also why respected writers such as Margaret Atwood, Walker Percy, and Cormac McCarthy--all of whom have written science fiction--have also avoided being labeled as science fiction writers. (3)

Movies and television are dominated by fantasy. Unfortunately, most of it is throwaway storytelling. Little resonates. The Lord of the Rings series is different. Despite Tolkien's claims that his tales of Middle Earth are not allegorical, we can see our own story unfolding before us, not just the story of the twentieth century, but of all of history. We are in an unceasing struggle against evil. If we win against evil, it's because of our better qualities: heroism, courage, determination, strength, loyalty, friendship, love. The Lord of the Rings is a great piece of moviemaking, but I don't think it won the Oscar for best picture because it's big and epic and loaded with special effects. I think it won because it's a very human story.

Finally, if there is any bias in tastes in fantasy fiction, it may be justifiable. Tolkien found his way into print without ever writing for a pulp magazine. It helped that he was a scholar and a professor. It also helped that he wrote for children, at least in The Hobbit. It may even have helped a little that he was British. More than anything, though, Tolkien was a good writer and a good storyteller. Was he a better writer than Lovecraft? That's like comparing apples to oranges. Was he better than the average pulp fictioneer? I'll leave that question open and instead close with a quote from Duke Ellington, whose judgment can be applied just as easily to literature as to music: "There are two kinds of music. Good music, and the other kind."

Next: Tolkien and Howard

Notes
(1) Phyllis Fraser in fact was from plumb in the middle of the country and hailed from Kansas City, Missouri. In addition to being married to Bennett Cerf, she was also a cousin to Ginger Rogers. I can keep going with this: A Hollywood actress for a time, Phyllis Fraser was also related in some vague and distant way to Rita Hayworth and Lucille Ball.
(2) This month--January 21 to be exact--marks the 90th anniversary of Judith Merril's birth. Happy Birthday, Judith!
(3) According to a friend, science fiction fans hold their own bias and look down their noses at comic books. Even comic books have become hoity-toity and are now split between "graphic novels," which are important, and comic books, which are still trash. By the way, there's a name for the difference between two levels of fantasy: High fantasy refers to stories like The Hobbit which take place in an imagined world. (Tolkien would probably argue that Middle Earth is not wholly imagined.) Low fantasy refers to stories set in our own world. That distinction--high vs. low--doesn't refer to the quality of the work itself. However, the word low certainly has its connotations. 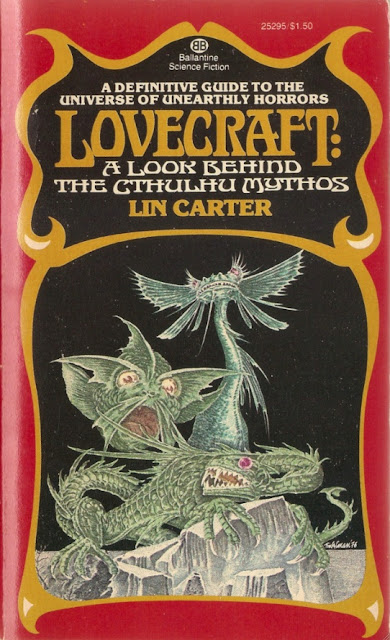