I have wondered about the first psychopathic killer and the first totalitarian in literature. I have candidates for both now. First the killer.

A story has come out that the identity of Jack the Ripper is now revealed. The suspect was named Aaron Kosminski, and he was a Polish-Jewish émigré to London. (1) Forensic evidence unavailable at the time supposedly places him at the scene of the murder of Catherine Eddowes, on September 30, 1888. Kosminski was a prime suspect at the time, so today's allegations aren't new. I'm not a Ripperologist, so I can't say how sound the case against Kosminski might be. He was without a doubt mentally ill and died in an insane asylum on March 24, 1919. Whether he was in fact Jack the Ripper is another story.

Aaron Kosminski worked as a barber, but he wasn't the first tonsorial specialist to terrorize London. That honor is reserved for Sweeney Todd, the Demon Barber of Fleet Street. Sweeney Todd as we know him today is a fictional character, but he was supposedly based on a real person. According to Wikipedia, "Sweeney Todd first appeared in a story titled The String of Pearls: A Romance," a penny dreadful published in serialized form in eighteen issues of The People's Periodical and Family Library, from November 21, 1846, to March 20, 1847 (numbers 7 through 24). The murderer's modus operandi is to drop his victims through a trap door into the basement of his shop. If the fall doesn't kill them, Sweeney does so by slitting their throats with a razor. Once relieved of their valuables, victims are cut apart and baked into meat pies by Sweeney's associate, Mrs. Lovett. The story of a murderous barber and cannibal pie-making goes back before 1847, but Sweeney's story is the one everyone knows. It has been adapted to stage and to song, as well as to books, movies, radio, television, and comic books over the last 167 years.

It's worth noting that the barber was traditionally not only a person who cut hair and beards, but also a surgeon, a dentist, and--by our terms--a quack doctor. The barber pole, a seemingly innocuous symbol, represents a wrapping of a doctor's bloody bandages. (2) There are those who believe Jack the Ripper to have been a physician or surgeon. H.H. Holmes passed himself off as a doctor. Josef Mengele was in fact a medical doctor. In my posting of May 12, 2014, I quoted Ivan Turgenev and his book Fathers and Sons (1862):

"For what do you want frogs, barin?" asked one of the lads.

"To make them useful," replied Bazarov. . . . "You see, I like to open them, and then to observe what their insides are doing. You and I are frogs too, except that we walk upon our hind legs. Thus the operation helps me to understand what is taking place in ourselves."

"And what good will that do you?"

"This. That if you should fall sick, and I should have to treat you, I might avoid some mistakes."

"Then you are a doctor?"

One way of thinking about the psychopath is that he is essentially a materialist, a person who sees human beings as machines and wishes to open us up to see what makes us tick. Every time, the ghost in the machine eludes him, and so he goes on killing. (4)

Notes
(1) If Kosminski was in fact the Ripper, he would have fit the role of the outsider, being a Pole--in other words, an Easterner--and a Jew at a time when both would have been suspect. We should remember that Dracula, from Bram Stoker's novel (1897), was also an Easterner and a killer who moved from the country to the city. In her book Blood Will Tell: Vampires as Political Metaphors (2011), Sara Libby Robinson links fears of vampires to fears of Jews, especially Eastern Jews. One of those links has to do with the accusation that Jews are bloodthirsty, the notorious blood libel that is as old as time and as new as the events of this summer. Mrs. Lovett, Sweeney Todd's associate, is not obviously Jewish; nonetheless, she bakes blood (and meat) into her wares, as Jews have been accused of doing throughout history. Like Mrs. Lovett, some psychopaths of the twentieth century also sold human flesh as meat to their customers. Others consumed that flesh themselves.
(2) The pattern on the barber pole is also a helix, like the caduceus and the Rod of Asclepius, but also like the double helix of the DNA molecule. The men who claim to have identified Aaron Kosminski as Jack the Ripper have used DNA evidence against him. So, live by the helix, die by the helix.
(3) Quoted in Lenin by Michael Morgan (1971), p. 12.
(4) People who believe that aliens are mutilating livestock point to the "surgical" precision of the wounds in question. Maybe aliens don't know what animates life on Earth, either, and are engaged in the same activity as earthly psychopaths. 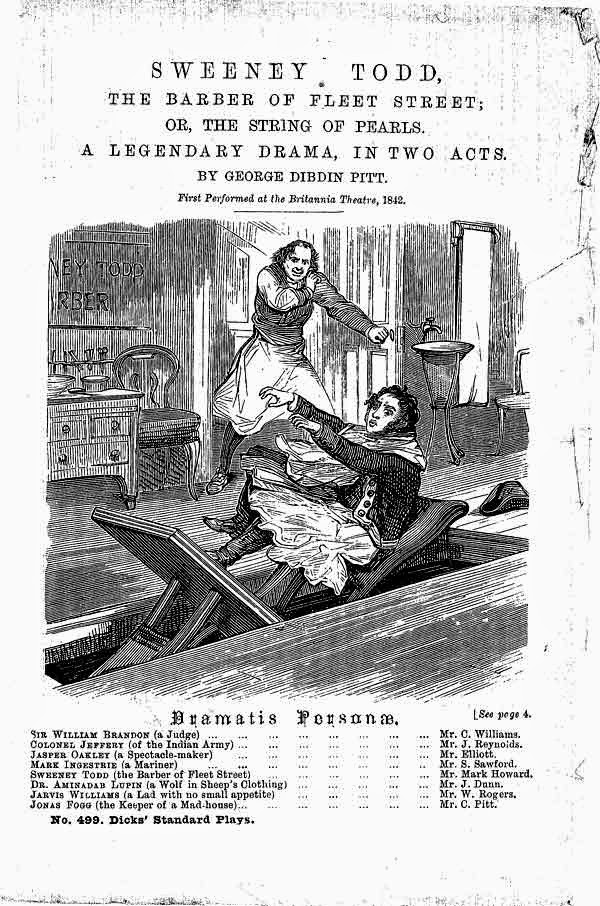 Email ThisBlogThis!Share to TwitterShare to FacebookShare to Pinterest
Labels: Weird Tales in Great Britain, What Is the Monster of the Twenty-First Century?