A Spacecraft Around Yuggoth

This week, on July 14, 2015, the spacecraft New Horizons, after a near decade-long journey, flew by Pluto, thus giving us our first close-up view of that distant world. Once upon a time, schoolchildren learned the mnemonic "My Very Educated Mother Just Sent Us Nine Pies," knowing that "Pies" stood for the ninth planet Pluto. In 2006, the same year in which New Horizons was launched, Pluto was demoted to the status of dwarf planet. You can imagine how the men and women who worked on New Horizons felt, knowing that their spacecraft was no longer on its way to a planet. Clyde Tombaugh (1906-1997), the discoverer of Pluto, would be fully justified in coming back from the grave except that part of him--about an ounce of his ashes--is on board the ship, now winging its way to the Kuiper Belt.

Pluto was found and named by young people, and young people have held the little planet close to their hearts. Clyde Tombaugh was twenty-four years old and working at the Lowell Observatory in Flagstaff, Arizona, (1) when he first detected the new planet on a number of photographic plates. The date was February 18, 1930. Nearly a month passed before an announcement was made to the larger world. Venetia Burney, an eleven-year-old schoolgirl from Oxford, England, provided the name, which became official on May 1, 1930. (2)

At about the same time that Tombaugh was poring over photographic plates in search of the elusive Planet X, a writer was at work on a new story in faraway Providence, Rhode Island. The writer was Howard Phillips Lovecraft, then in his fortieth year and enjoying some success as an author of pulp fiction. His story progressed through the year 1930 and was finally finished in September. A year later, in the same month that Lovecraft turned forty-one, the magazine Weird Tales published "The Whisperer in Darkness." Lovecraft's story is now considered one of his best. In 2011, about halfway through the flight of New Horizons from Earth to Pluto, "The Whisperer in Darkness" was released as a feature-length movie. It included a new character, a girl named Hannah Masterson, who must have been about Venetia Burney's age.

"The Whisperer in Darkness" is about a struggle between men and Mi-Go, a race of crustaceous fungi from another world. The narrator explains:

The blasphemies which appeared on earth, it was hinted, came from the dark planet Yuggoth, at the rim of the solar system; but this was itself merely the populous outpost of a frightful interstellar race whose ultimate source must lie far outside even the Einsteinian space-time continuum or greatest known cosmos.

"There are mighty cities on Yuggoth--great tiers of terraced towers built of black stone like the specimen I tried to send you. That came from Yuggoth. The sun shines there no brighter than a star, but the beings need no light. They have other subtler senses, and put no windows in their great houses and temples. Light even hurts and hampers and confuses them, for it does not exist at all in the black cosmos outside time and space where they came from originally. To visit Yuggoth would drive any weak man mad--yet I am going there. The black rivers of pitch that flow under those mysterious cyclopean bridges--things built by some elder race extinct and forgotten before the beings came to Yuggoth from the ultimate voids--ought to be enough to make any man a Dante or Poe if he can keep sane long enough to tell what he has seen."

"[T]he dark planet Yuggoth, at the rim of the solar system" would seem to refer to the newly discovered Pluto. Lovecraft is supposed to have suggested as much. Yet the concept of Yuggoth predates the discovery of the planet, for Lovecraft penned a series of sonnets, entitled "The Fungi from Yuggoth," between December 27, 1929, and January 4, 1930. It would not be the last time that an artist anticipated Pluto.

Robert E. Howard, born just thirteen days before Clyde Tombaugh, (3) also wrote about a planet on the edge of space. In his story "The Tower of the Elephant," published in Weird Tales in March 1933, the eponymous elephant relates his story to Conan of Cimmeria:

"I am very old, oh man of the waste countries; long and long ago I came to this planet with others of my world, from the green planet Yag, which circles for ever in the outer fringe of this universe. We swept through space on mighty wings that drove us through the cosmos quicker than light, because we had warred with the kings of Yag and were defeated and outcast. But we could never return, for on earth our wings withered from our shoulders. Here we abode apart from earthly life. We fought the strange and terrible forms of life which then walked the earth, so that we became feared, and were not molested in the dim jungles of the east, where we had our abode."

An etymologist might identify Yuggoth and Yag as having come from the same root. So were they the same planet? Were the Mi-Go "the kings of Yag"? And did Howard anticipate the discovery of the solar wind? (4)

Finally, in 1979, space artist Don Dixon painted a portrait of the then-planet Pluto. The images from New Horizons, reaching our Earth this week, confirm the artist's vision. I have read some comments by Internet numbskulls saying they don't see a resemblance. I find the resemblance extraordinary. I also find it extraordinary that we can at last see the surface of Pluto--of dark, distant Yuggoth--so clearly.

Notes
(1) Established by Percival Lowell (1855-1916), the man who put Martians on Mars. His initials are the fist two letters of the name Pluto, a planet whose existence he postulated and which he called Planet X.
(2) Venetia Burney died one day short of that anniversary in 2009.
(3) It's interesting that Clyde Tombaugh discovered Pluto in his birth month and that "The Whisperer in Darkness" was published in Lovecraft's birth month.
(4) The Mi-Go also fly through space on wings. Theirs are weak in comparison to those of the elephants of Yag. Maybe that's why the elephants reached Earth first. 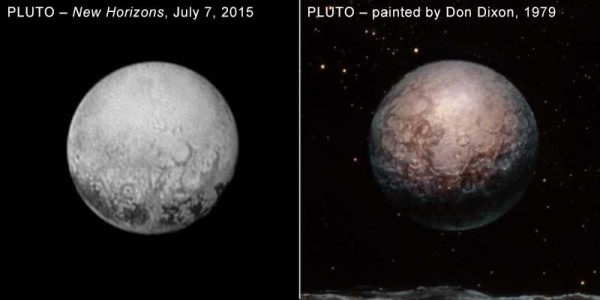