Frederick S. Humiston, Jr., was born on July 20, 1902, in Jersey City, New Jersey, and grew up in Hillsdale, New Jersey. He graduated from Hillsdale High School in 1920 and went to work as a commercial artist at the Vitaphone Company in New York City. The young artist's uncle, Walter J. Rich, was president of Vitaphone at the time, and the company was engaged in developing sound for movies during the 1920s. In 1922, Humiston's parents purchased the Hotel Riverside in Popham, Maine. For many years afterwards, the family alternated between Maine and New Jersey, then between residence at the hotel and a house in Popham. After the deaths of his parents in the early 1940s, Humiston sold the hotel but still alternated between homes in Maine and New Jersey. He finally settled in Portland, Maine, where he wrote stories and drew pictures for the Portland Herald Press. He also wrote and illustrated Blue Water Men and Women, published in 1965.

Fred Humiston created illustrations for Weird Tales beginning with "The Crowd" by Ray Bradbury in May 1943 and ending with the poem "Suspicion" by Harriet A. Bradfield in November 1953. One of those illustrations was reprinted in the magazine in the Winter 1985 issue. Humiston also contributed to Short Stories, including a cover for the November 10, 1947, issue (shown below).

Further Reading
See David Saunders' Field Guide to Wild American Pulp Artists, here, for a more full biography of Fred Humiston. My article is merely a condensed version of his, and I am entirely indebted to Mr. Saunders. 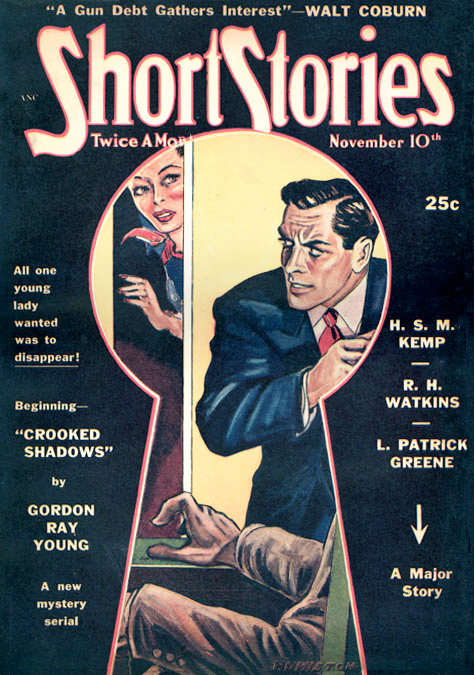 Email ThisBlogThis!Share to TwitterShare to FacebookShare to Pinterest
Labels: Artists