Fiends and Murderers of the 1920s

I have started this year writing about the undead and the dead. The dark tone will continue for a while, beginning today with the first of a three-part series on fiends and murderers on the cover of Weird Tales. I'll try to find a way to brighten things up in the next few weeks, although I still want to find out and write about the origins of zombies in American popular culture.

When I was in South Korea, I was a member of the 36th Tactical Fighter Squadron. We were called the Flying Fiends. Our unit patch showed a creature wearing an old-fashioned aviator's helmet. Some of the guys called him "the slobberin' dog." I thought then that a fiend is simply a monster of some kind. Then my friend Joe told me that he looked it up and that a fiend is a sexual deviant. I just looked it up again. My dictionary says that a fiend is "a diabolically cruel or wicked person" or "an evil spirit." That doesn't get away from the depiction of fiends on the cover of pulp magazines, including the seven covers on display here. Each shows a man attacking, threatening, or abducting a woman. The sexual connotations are unavoidable. I tend to think that my friend Joe was right and that a fiend is sexual deviant or a sexual predator on women. 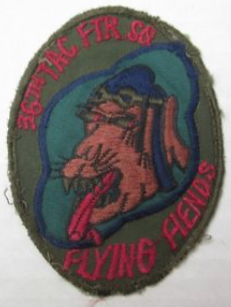 Showing or telling about women in peril is as old as storytelling, of course. It gives men and boys a chance to imagine themselves as rescuers of women. Pulp magazines, however, emphasized the sexual aspect of women in peril. (Maybe that gave men and boys a bit of a thrill or even a chance to imagine themselves as the tormenters of women.) They also emphasized sexual deviancy and sexual violence, including bondage, sadism, torture, and sexual mutilation. That was the hallmark of the weird menace pulps of the 1930s. But as the covers below show, there was fiendishness and murderousness in pulps before that. I count seven such covers of Weird Tales from the 1920s. Four are obviously in this category. Three are less certain. Unfortunately, I haven't read any of these cover stories, so I can't say for sure.