I sense two possible connections between Orville R. Emerson and Weird Tales, connections other than his authorship of a story for the first issue of the magazine.

First, Emerson's father, Reverend Frank W. Emerson, was affiliated with the Prohibition Party prior to World War I. Emerson himself was a member of the American Legion, which was established in 1919. In the year of its founding, the American Legion moved its headquarters to Indianapolis, Indiana. That same year, a young man of Pennsylvania, recently out of the U.S. Navy, also relocated to Indianapolis to work on an organ of the Prohibition Party. The young man's name was Jacob Clark Henneberger. In 1922, he formed, with his friend John M. Lansinger, Rural Publishing Corporation. Although the firm was based in Chicago, the editorial offices for its new magazine of 1923, Weird Tales, were in Indianapolis. I think it possible that Orville R. Emerson learned of Weird Tales through his father's connections to the Prohibition Party, more likely through his own connections to the American Legion. Both connections eventually led to Indianapolis, home also of the magazine in which his first and only story was published. By coincidence, the Cornelius Printing Company, which effectively gained control of Weird Tales in 1924, were also the printers of The American Legion Magazine beginning that same year.

Second, Orville R. Emerson was married to Lila Strait, daughter of Mr. and Mrs. J.H. Strait of Redlands, California. J.H. Strait was president of Mutual Orange Distributors of Redlands, which was in business for many years inclusive of the 1920s. Well, in 1920, a future teller of weird tales was working as an orange packer in Redlands, and it wasn't Orville Emerson. Rather, it was F. Georgia Stroup (1882-1952), who had her story "The House of Death" in Weird Tales, by strange coincidence the same month in which Emerson's story "The Grave" appeared. So did F. Georgia Stroup work at Mutual Orange Distributors? And did she know Orville R. Emerson? Could they have talked to each other about their stories and about this new magazine Weird Tales? The possibility is fascinating to consider. 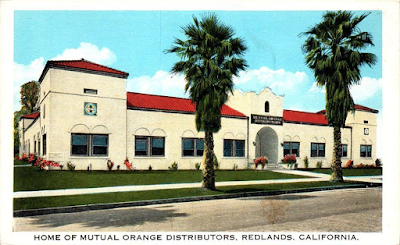