A New Book by J.A. Lawrence

Judith Ann Lawrence, also known as J.A. Lawrence and Judy Blish, has just had a collection of her short stories published by Reanimus Press. It's called The Other Side of the Surface and Other Stories, and it includes not only her fiction but also some of Judy's artwork.

J.A. Lawrence is an author herself, but she was also married to an author and the daughter of not one but two authors. Her mother was Muriel Cameron Bodkin (1903-1994), who contributed to Weird Tales. (Click here.) Her father was the Canadian-American pulp writer John Frederick Brock Lawrence (1907-1970), better known as Jack Lawrence. Their daughter Judith was married to science fiction author James Blish (1921-1975) from 1964 until his death in 1975. Judy's new book includes a reimagining of James Blish's classic story "Surface Tension," originally published in Galaxy Science Fiction in August 1952.

I don't have advertising or provide links to commercial websites on my blog, but that's okay because you already know how to order books. Just head on down to your local megacorporation and pick up Judy's new collection The Other Side of the Surface and Other Stories today. 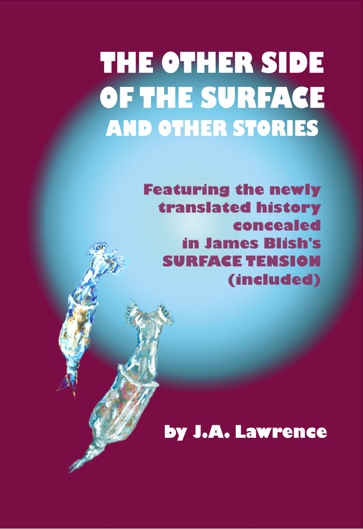 Email ThisBlogThis!Share to TwitterShare to FacebookShare to Pinterest
Labels: Authors of the Golden Age of Science Fiction, Women Writers in Weird Tales