I have begun swinging back around to my series on Utopia and Dystopia in Weird Tales. Step One: Show group photograph of Los Angeles Science Fiction League, circa 1939.

Last week I stopped by Half-Price Books, one of my favorite stores and one of few commercial establishments that I will mention by name in this blog. (I have a policy against advertisements.) I planned mostly on selling books and buying only a little. The store I went to had a different idea, though, because it put out for sale a book called The Ray Bradbury Companion, written and compiled by William F. Nolan (b. 1928) and published in 1975. How was I supposed to pass that up? It may have some writing in it, but it's a book I have never seen before and may never again.

As you might expect, there are all kinds of things included in The Ray Bradbury Companion. One is a group photograph, shown below. Before getting to that, I'll tell you about the man who wrote in my new copy of this book.

I don't like it when people write in books. We think we own these things, but aren't we really just caretakers? Shouldn't we do the best that we can to ensure that every book makes it into the next generation with as little damage and wear as possible? And shouldn't we all want to avoid any comparison at all to Carlos Allende and his little personalities? Anyway, inside the front cover of my new book, a previous owner wrote his name, Max Westbrook, and the date, September 1975. Like Allende's Mr. A, Westbrook used green ink for his inscription, underlining, and marginalia. I sensed that he could have had some connection to Ray Bradbury, but after looking into it, I'm not sure that he did. I found out about Max Westbrook, though, and he was a literary critic and teacher of some note. So:

Max Roger Westbrook was born on April 6, 1927, in Malvern, Arkansas. He attended Pine Bluff High School in Pine Bluff, Arkansas, and served in the U.S. Navy in the World War II era and again in the Korean War era. Dr. Westbrook received his bachelor's degree from Baylor University, his master's at the University of Oklahoma, and his doctorate at the University of Texas. He taught at the universities of Oklahoma, Wisconsin, Kentucky, and Texas. His books included The Modern American Novel: Essays in Criticism (1966), Walter Van Tilburg Clark (1969), Country Boy (verse, 1979), and Oregon or Bust (1985). He was a longtime member of the Western Literature Association and won the association's Lifetime Achievement Award in 1988. His headstone reads like the title of one of his books: "Country Boy." Dr. Westbrook died on July 25, 2002, nineteen years ago next week.

Knowing that Max Westbrook owned my copy of The Ray Bradbury Companion before I did takes away some of the bad feelings I have about writing in books. Anyway, here is the photo, just as it appears on page 28: 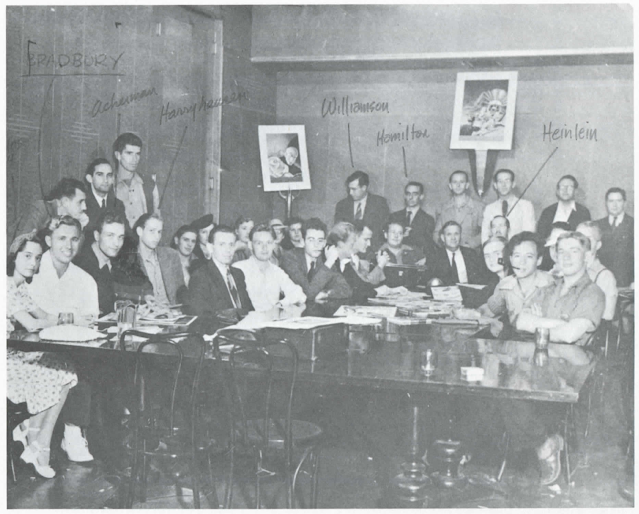 And here is the caption, ditto: 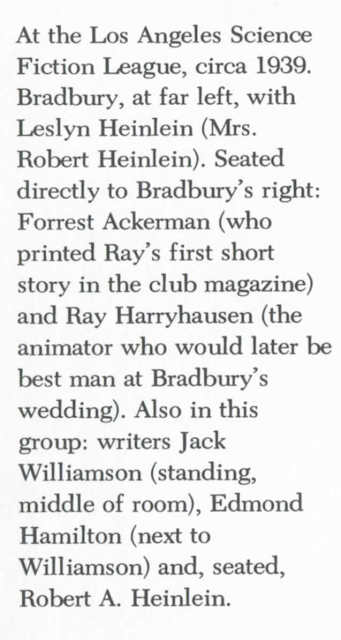 Ray Bradbury was friends with Forrest J Ackerman. Ackerman is in the book The Faces of Science Fiction (1984), about which I wrote not long ago. A discussion of that entry is Step Two in my return to Utopia and Dystopia.