Readings Over Christmas No. 2-The "Lomokome" Papers by Herman Wouk

On the Monday after Christmas we drove all the way to the top of the great state of Indiana. We ate lunch in a local restaurant, visited a local museum, and shopped at a national chain, Half Price Books, the only store that I'm likely to name on this blog. I found a few books, including The "Lomokome" Papers by Herman Wouk (Pocket Books, 1968). I had not known that the late Mr. Wouk (1915-2019) wrote a science fiction story. I was happy to find it, especially considering that it's illustrated. The artist was Harry R. Bennett (1919-2012), a near contemporary of the author.

Herman Wouk wrote a preface to the paperback edition of his story. It's dated May 27, 1967, his fifty-second birthday. He wrote that he was inspired to try his hand at science fiction by reading Marjorie Hope Nicolson's "charming book" Voyages to the Moon (1948). "The moon trip can be a romantic adventure, a social satire, or a utopian sermon," Wouk wrote. "Mine is a mixture of these." The "Lomokome" Papers has a good deal in common with The Moon Maid (1925) by Edgar Rice Burroughs and Maza of the Moon (1929-1930) by Otis Adelbert Kline, including a crashdown on the Moon's surface, the captivity of the lunanaut, an examination of lunar society, and accounts of war among the people of Earth's lone natural satellite.

The word Lomokome deserves explanation. According to the author, it's a Hebrew word meaning "Utopia" or "Nowhere." So we have another utopian/dystopian work, as well as another utopian/dystopian work about the Moon and its necessarily alien society, one that may be uncomfortably close to our own. The "Lomokome" Papers is self-consciously in the tradition of the fantastic voyages of literature dating from ancient times to the eighteenth and nineteenth centuries. Many of these are satires, as is Wouk's short novel, the narrator of which is Lt. Daniel More Butler, USN, his name self-consciously derived from the names Daniel Defoe, Thomas More, and Samuel Butler. What Lt. Butler discovers on the Moon is a solution to the murderous destruction of warfare. What he finds, we would not like.

The "Lomokome" Papers was written in 1949 and apparently first published in Collier's in its issue of February 17, 1956. Again, Wouk wrote his preface on May 27, 1967. According to the Internet Speculative Fiction Database (ISFDb), the paperback edition was published in March 1968. My edition, with Harry Bennett's cover as shown below, is dated May 1968. It has since been published in Italian- and German-language editions. The timing of all of this is worth knowing, for The "Lomokome" Papers, in its proposed solution to the problem of war, is very much like the Star Trek episode "A Taste of Armageddon," written by Gene L. Coon and broadcast on February 23, 1967. Rather, it's the other way around. I have a feeling that if you look closely enough, you will find the roots or inspiration for many, if not most, Star Trek episodes in the magazine and book science fiction of the 1940s, '50s, and early '60s. 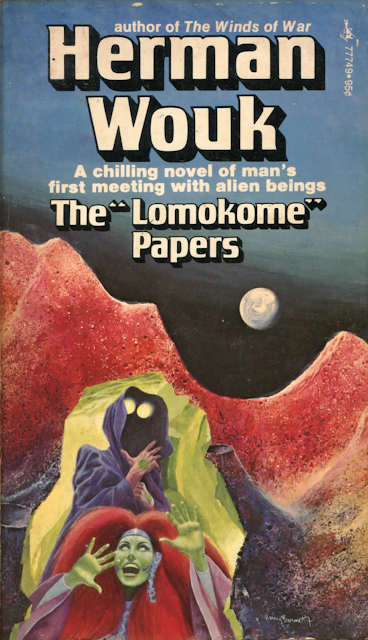