Aka Anice Page Cooper
Author, Editor, Poet, and War Correspondent
Born January 7, 1891, Salem, West Virginia
Died January 5, 1958, Charleston, South Carolina
Anice Page Cooper was born on January 7, 1891, in Salem, West Virginia, and attended Ohio Wesleyen University in Delaware, Ohio. She seems to have begun her career as a writer and editor using her full name, but by the time she began contributing to Weird Tales magazine in the early 1940s, she had shortened it to Page Cooper. Page wrote and edited numerous books, many of which were horse stories, including Man o' War (1950) and Amigo: Circus Horse (1955), illustrated by Henry C. Pitz. She was a versatile writer, though, authoring journalistic, biographical, and poetical works as well. During World War II, Page served as a war correspondent in the Pacific Theater, reporting on the experiences of Navy nurses. She continued in her freelance career after the war, writing a number of books for young people. In all she contributed eight poems to Weird Tales between 1942 and 1951. Most have a single word for their titles. Taken together, those eight titles could almost tell a story in themselves. Anice Page Cooper died suddenly on January 5, 1958, in Charleston, South Carolina, two days short of her sixty-seventh birthday.
Page Cooper's Poems in Weird Tales
"The Curse" (Jan. 1942)
"Hunger" (Mar. 1942)
"A Charm" (July 1944)
"Quest Unhallowed" (Mar. 1945)
"Remorse" (Sept. 1945)
"A Curse" (Jan. 1949)
"Incantation" (Sept. 1950)
"My Timid Soul" (Jan. 1951) 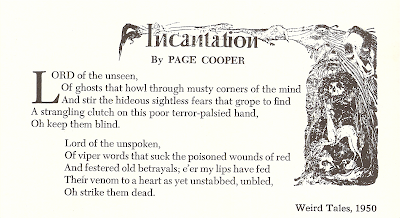 Another poem by Page Cooper, from The Bookman:
WILD GOATS
The moon is full but it won't spill over
And it won't fall out when it hangs askew.
The bees suck honey from tall red clover,
But they won't get drunk of it.
Bees never do.
I gave my heart to a girl with amber
Eyes like the windows the saints shine through.
She dragged it through brambles where wild goats clamber.
But my heart won't break of it.
Hearts never do.
Text copyright 2011 Terence E. Hanley
Posted by Terence E. Hanley at 10:06 PM