Today ends "Women in Horror Month," designed to celebrate artists, writers, filmmakers, and other women who have contributed to the horror genre. There is of course a subtle difference between weird fiction and its kindred genres of horror, fantasy, and science fiction. I'll leave it to someone else to draw the line. In any case, today, in observance of "Women in Horror Month," I would like to tell about Everil Worrell, one of the most prolific contributors to the magazine Weird Tales.

In the 1970s, author, editor, and Weird Tales expert Robert Weinberg issued a series of six small, numbered volumes called The Weird Tales Collector. One of the highlights of the inaugural issue is a biography and bibliography of Everil Worrell, written by her daughter, Jeanne Eileen Murphy, and annotated by Mr. Weinberg. I can't top Ms. Murphy's account of her mother's life and work. Instead I'll just hit the high points.

From birth, Everil Worrell must have been destined to write tales of the weird and fantastic. She was born at the witching hour, one minute after midnight on November 3, 1893, the day after All Souls' Day, or, in Latin America, the Day of the Dead. She was an only child and the daughter of a school principal, teacher, accounting auditor, and patent examiner. In her youth, she lived with her family in Nebraska, Iowa, Montana, Oregon, Guam, Washington, D.C., and finally Arlington, Virginia. Everil Worrell studied music, voice, literature, English, and psychology at George Washington University and the University of California at Berkeley and afterwards went to work for the U.S. government as a secretary and stenographer.

Everil married Joseph Charles Murphy in early 1926. A few months later, Weird Tales published the first of her nineteen stories for the magazine. Her last appeared in the March 1954 issue, only a few months before Weird Tales gave up the ghost, thus giving her one of the longest tenures with the magazine. Eighteen of those stories were under her own name. One--"Norn"--appeared under the byline "Lireve Monet." (1) Everil also wrote a number of letters to "The Eyrie" and contributed to other fantasy magazines, including Ghost Stories ("The Key and the Child," Oct. 1930; "None So Blind," Mar. 1931) and Mystic Magazine ("The White Gull," Aug. 1955). Several of her stories were reprinted in later collections, and one--"The Canal"--was adapted to television in an episode of Rod Serling's Night Gallery.

In addition to being a writer, Everil Worrell played the violin, sang, painted, and joined a number of clubs, including the League of American Pen Women, the Writer's League of Washington, and the Society of Free Lance Writers. While living in Washington, D.C., she also met with others who wrote for or were fans of Weird Tales, including Julius P. Hopkins, Seabury Quinn, Bruce Bryan, Earl Pierce, Jr., and William and Elizabeth Foster. She, like countless others, "was broken hearted when Weird Tales folded in 1954."

Everil Worrell retired on the last day of 1957 and received the Albert Gallatin Award from the U.S. Department of Treasury for her years of service. She died eight years later, on Thanksgiving Day, 1969, at age seventy-six. Her daughter described her as "a wonderful person and a wonderful mother," adding "she left much beauty and goodness behind her and I know she will always be safe with God."

Notes
(1) Lireve is Everil spelled backwards, while Monet is an adaptation of her mother's name, Manatt. In The Weird Tales Collector, Robert Weinberg wondered whether the name O.M. Cabral could have been her pseudonym as well. According to Wikisource, O.M. Cabral was the American author Kenneth MacNichol (1887-1955). Finally, Everil Worrell's nineteen stories for "The Unique Magazine" would place her among the top twenty-five or thirty authors in terms of prolificacy.

Further Reading
Several of Everil Worrell's stories have been reprinted in paperback and hardbound anthologies. A simple Internet search will yield plenty of results. 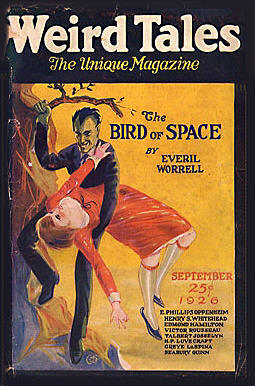 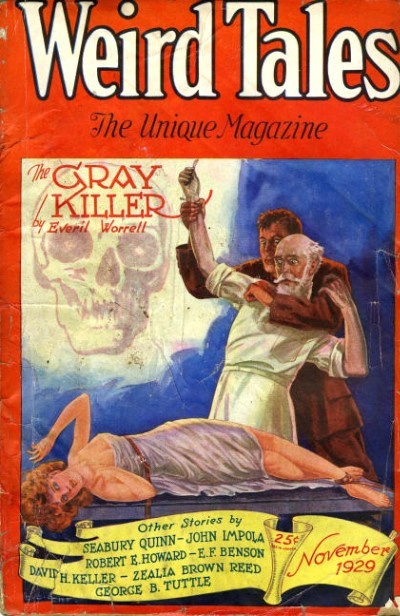