June Power Reilly's family was deeply rooted in American history. On her mother's side she was descended from Revolutionary War veteran Henry Foster (1762-1849), a Virginia private who served two years on the Virginia line and died in Nicholas County, Kentucky. Her paternal grandfather was George Power, called Squire Power by the people in and around Springfield, Illinois, where he farmed and served as justice of the peace for twenty years. Some believe a young lawyer named Abraham Lincoln argued his first case before Squire Power in 1836. Author John Drury offers an account:

The story of Lincoln's appearance before Squire Power was told several years ago by V. Y. Dallman in his column in the Illinois State Register. "According to Clayton Barber [Sangamon County attorney] there is no definite record as to this first law suit," writes Dallman, but Mr. Barber believes it was the suit involving the killing of a dog in which Lincoln defended the man with the shotgun who killed the dog! The owner of the dog insisted that the man who shot the dog should have used 'the other end of the gun,' to which Mr. Lincoln replied, 'that would have been all right if the dog had come at him with the other end.' " (1)

Squire Power built a spacious house on his large farm in the 1850s. Among his guests was Stephen A. Douglas, Lincoln's opponent in the presidential election of 1860. Power's son William was also a judge who just happened to hear Abe Lincoln's last case in Sangamon County before he became president. Upon Squire Power's death, the Power farm passed to another son, James Power, thence to James' son Charles, and finally to June Power, James' daughter.

Arminta June Power was born on May 20, 1885, probably on the farm near Cantrall, Illinois. Her father was James England Power, her mother, Laura Cord Power. On June 24, 1903, just past her eighteenth birthday, June Power married Frank Creveling Reilly (1870-1945), a railroad agent and heir to a fortune, in Chicago. By the time a county plat book was published in 1914, June was in possession of a farm of over 600 acres in Fancy Creek Township in Sangamon County.

By 1920, the Reillys had relocated to St. Louis, and Frank Reilly was employed as a vice-president of the Walter A. Zelnicker Supply Company. He and his wife had two daughters, Frances (1904-2000) and Virginia (1906-1994). A graduate of the University of Chicago, Virginia Caroline Reilly Glore was an actress, dancer, writer, editor, and teacher. In 1932, she directed the Tournament of Roses Festival in Pasadena, California. Her tombstone reads:

June Power Reilly wrote one poem for Weird Tales, "Why Was My Dream So Real?" from July 1935. I have also found a poem (below) about her home in the Sangamon River country of Illinois. Intentionally or not, June's poem echoes the meaning of the Pottawatomie name Sangamon: "where there is plenty to eat." As was her due, June Power Reilly was a member of the Daughters of the American Revolution. In 1960, she and her local chapter placed a historical marker at the courthouse where Abraham Lincoln tried his first case, located on the Power farm. June Power Reilly died on January 4, 1973, and was buried in Springfield, Illinois.

Old road,
You who have a new name,
They cannot take from you your memories.
You wind across the corn lands
Over Sangamon:
Once a narrow Indian trail.
Hoofs of Indian ponies knew you,
Tepees were pitched beside you,
Camp fires blazed.

Ox carts creaked along your way;
Our forefathers found you.
You held out your hand in welcome.
You guided them to the river.
You whispered, "On to the land of plenty!"
Indians were your friends.
White men were your friends--
You loved them all.

Now you are grown old
And wearied by the noise of many motors.
You dream and long for the early days . . . .
They would wrest your name from you, old Chinkapin:
They have dressed you in new finery,
But they cannot take your memories. 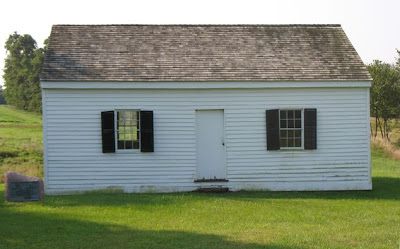 Revised slightly January 6, 2019.
Thanks to Randal A. Everts for June Power Reilly's place of death.
Text and captions copyright 2012, 2019 Terence E. Hanley
Posted by Terence E. Hanley at 6:00 AM