In his lifetime, Henry Wadsworth Longfellow was one of the most beloved of American poets. He was the author of some of the most well known and widely read poems of his century, including "The Children's Hour," "The Courtship of Miles Standish," "Evangeline," "Excelsior" (from which Stan Lee seems to have taken his sign-off in Marvel Comics), "I Heard the Bells on Christmas Day," "Paul Revere's Ride," "The Song of Hiawatha," "Tales of a Wayside Inn," "The Village Blacksmith," and "The Wreck of the Hesperus." Virgil Finlay adapted Longfellow's poem "The Skeleton in Armour" to his Weird Tales poetry series in June 1938. The subject of the poem is a skeleton, thought to be that of an American Indian, discovered in Fall River, Massachusetts, in 1832. Others believe the skeleton to be just one piece of evidence of pre-Colmbian visitations by Europeans to the Americas. Wikipedia lists a number of other structures and artifacts of questionable or mysterious origins in this category. Among them: America's Stonehenge, also called Mystery Hill, located in Salem, New Hampshire, and believed by some to have been an inspiration for H. P. Lovecraft in his story "The Dunwich Horror" (Weird Tales, April 1929). Another possible connection between Longfellow and Weird Tales: fantasy author Evangeline Walton, born during the centennial year of the poet's birth into a well educated and scholarly family, may very well have been named after Longfellow's poem "Evangeline."
Henry Wadsworth Longfellow's Poem in Weird Tales
"The Skeleton in Armour" (June 1938, part of Virgil Finlay's poetry series) 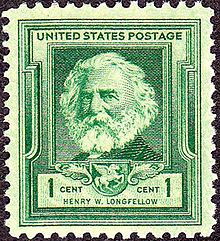