If you played the Game of Authors when you were a child, you will remember Nathaniel Hawthorne's face and the titles of his works. Even if you were unfamiliar with the books themselves, their names evoked images of early America: Fanshawe (1828), Twice-Told Tales (1837), Mosses from an Old Manse (1846), The Scarlet Letter (1850), The House of the Seven Gables (1851), The Blithedale Romance (1852), A Wonder-Book for Girls and Boys (1852), Tanglewood Tales (1853), The Marble Faun (1860). The author of these works was born on his nation's twenty-eighth birthday, July 4, 1804, in Salem, Massachusetts, and was descended from a judge at the Salem witchcraft trials. It should come as no surprise that sin, guilt, punishment, and Puritan severity were perennial themes in Hawthorne's stories and novels. Like William Faulkner after him (who was similarly occupied in his work), Hawthorne added a letter to his surname, changing it from Hathorne to Hawthorne.
Hawthorne was friends with or acquainted with many of the most well known figures in the New England of his time, including Franklin Pierce, Henry Wadsworth Longfellow, Ralph Waldo Emerson, Henry David Thoreau, Ellery Channing, Edwin Percy Whipple, Herman Melville, and the publishers Ticknor and Fields. Hawthorne's wife was the artist, illustrator, and Transcendentalist Sophia Peabody (1809-1871). I would not be surprised to learn that Hawthorne was connected by only a few degrees of separation with another New Englander, H.P. Lovecraft (1890-1937).
Weird Tales reprinted eight stories by Nathaniel Hawthorne, all prior to 1940. I'm beginning to see a pattern in the printing history of "The Unique Magazine." It seems that Farnsworth Wright, editor between 1924 and 1940, sought out works by well known authors of the past, either to lend an air of respectability to his magazine or because those works were in the public domain. In any case, the reprints seemed to have come to an end under Dorothy McIlwraith after 1940.
I'll close with a double quote from Wikipedia:

Hawthorne defined a romance as being radically different from a novel by not being concerned with the possible or probable course of ordinary experience. In the preface to The House of the Seven Gables, Hawthorne describes his romance-writing as using "atmospherical medium as to bring out or mellow the lights and deepen and enrich the shadows of the picture." 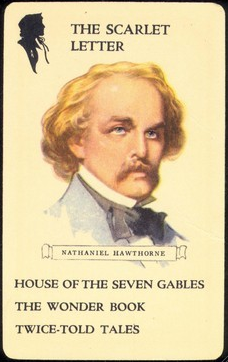 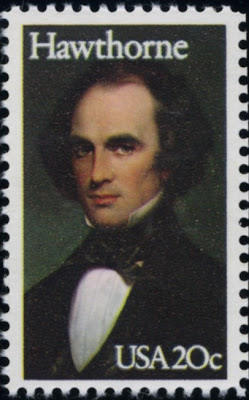