A. Merritt Art Gallery-The Conquest of the Moon Pool 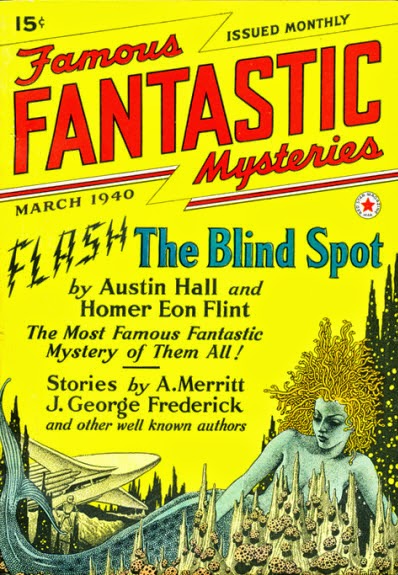 The Woman of the Moon Pool
There are images from science fiction that stick in the head of every fan. This one--by the artist Lawrence--sticks. To me it represents a long-ago and utterly lost era in American culture, especially in art and science fiction. The draftsmanship and technique are flawless. They are the work of a master craftsman. The foreshortening of the arm, the handling of flesh and underlying bone, the shading, the positioning and rendering of the fingers--all are perfect. That takes nothing away from the figure as a whole or its accoutrements, which are beautifully and impeccably done. In our current age when everything is becoming miniaturized, weapons in science fiction and comic books have become ridiculously huge (as have breasts and biceps). The artists and designers of today could learn a thing or two in the economy of Lawrence's little derringer-like blaster.

The woman is of course beyond glamorous. She reminds me of those sweater girls from postwar Hollywood movies--Virginia Mayo, Janet Leigh, Ava Gardner. Not that she is an object, for the woman in Lawrence's painting is strong and determined. She represented a certain ideal of her time, I'm sure. Women like her worked in factories and flew airplanes during the war. The men who fought, fought in part for her and to return to her. Together they defeated tyrants and built the most prosperous society the world has ever known.

My feeling of nostalgia goes beyond the artist's ability or the woman's looks or femininity or strength. A pulp magazine is a magazine full of stories and art, but it's also an artifact of a previous era. (I have read a quote that magazines are the closest thing to a time machine we have.) In the 1940s, the future as represented in science fiction was going to be great. Having survived the onslaught of totalitarianism (a kind of science-fictional system of belief), Americans looked with confidence (though also with some anxiety) to the future. A cover of a science fiction magazine like this one is a kind of symbol of those prevailing feelings and of the era in which it was published. A movie from that time is called The Best Years of Our Lives (1946), an ironic title to be sure, but also true and un-ironic in its way. (The line is spoken by Virginia Mayo's character.) A history of the same period is called The Best Years: 1945-1950 by Joseph C. Goulden (1976). The titles are not boastful or prideful. There's more than a sneaking suspicion that they are true.

Now we have arrived in the future--an alternate future--in which we have stopped ourselves dead in our tracks. Science fiction, being essentially optimistic, is no longer our genre of choice. Fantasy, including the darkest kinds of fantasy, has taken its place. Instead of being an expression of her own life and character, a beautiful woman--so called--is now a concoction of Botox, collagen, silicone, artificial tan, and a plastic surgeon's skill with knife and suction tube. Depictions of beautiful women today are seen as symbols of patriarchy, oppression, sexism, and injustice. Men and women both seem to prefer ugliness to beauty. I won't linger over that. The ills of our society go far deeper. Instead I wonder, did the men and women of the 1940s fight and die and build and bring children into the world so that we could give up hope and the freedom they won, so that we could collapse in on ourselves and wallow in our most miserable self-indulgent and self-absorbed misery? I wonder, too, does it make any sense to feel a sense of nostalgia for a time of hope and optimism, in other words, to look backward to a time of looking forward, to remember so fondly a previous civilization that fought for freedom and was filled with hope but that, for all practical purposes and mostly by our own actions, now lies in ruins at our feet?

Email ThisBlogThis!Share to TwitterShare to FacebookShare to Pinterest
Labels: A. Merritt, Virgil Finlay