The image from my previous article, the aeronon of the twentieth century, is from the book Predictions by John Durant, published in 1956. In his book, Mr. Durant quoted from the original source:

As entirely new profession--that of airmanship--will be thoroughly organized, employing a countless army of airmen. . . . Boundaries will be obliterated. . . . Troops, aerial squadrons, death-dealing armaments will be maintained only for police surveillance over barbarous races, and for instantly enforcing the judicial decrees of the world's international court of appeal. (p. 28)

That sounds an awful lot like Cabal's speechifying in Things To Come (1936). In other words, H.G. Wells spouted the same kind of thing in his screenplay that an American magazine had written about nearly six decades before, when he was just twelve years old. (The golden age of science fiction by the way.) But then Wells was an adherent to socialism, just one of myriad, useless, nineteenth-century visions for the future, outdated in his time, delusional in its own, and even more delusional in the 1930s. (Deadly delusion.) These people call themselves progressives, yet they keep getting themselves mired in the ideas of the dead and distant past. And now we have several of them running for president, one of whom is old enough to have been dandled on Grandpa Marx's knee. Sheesh.

Anyway, the quote from above also sounds like the motivation behind Klaatu's mission to our planet in The Day the Earth Stood Still (1951), one in which Gort is to act as "police surveillance over barbarous races." The Day the Earth Stood Still is a great and very enjoyable science fiction movie, but I think it helps to take it as one of a pair, the more liberal (I won't say "progressive") face of a coin that has on its other face the more conservative film The Thing from Another World (also 1951). All of that, though, is subject for another day.

Just one more thing . . . it occurs to me now that Michael Rennie as Klaatu may have been intended to invoke memories of Raymond Massey as Cabal. Both actors were tall, dark, slender, and British, or at least British-oid. (Massey was Canadian.) Both characters have liberal-slash-progressive views on things, bordering on the tyrannical or totalitarian. (One is far more arrogant and dangerous than the other.) They also both wear the broad-shouldered outfit of the future, like Carol Burnett playing Scarlett O'Hara: "If I don't find some sparkling outer-space duds to wear, it's curtains for me!"

Wells and Cabal will return yet again in the next installment. Stay tuned. 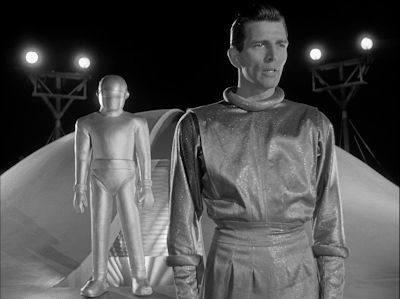 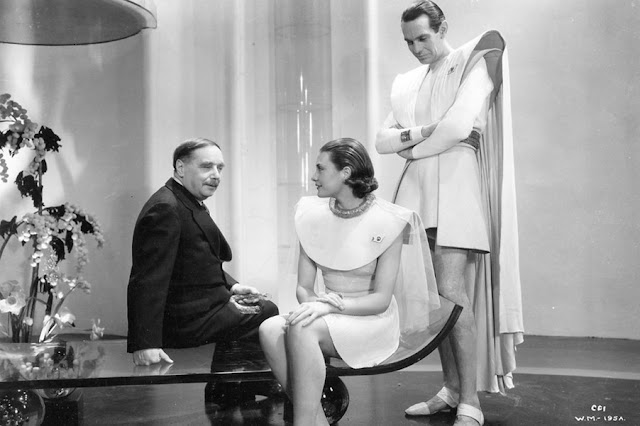