Notes on "The Colour Out of Space"

I recently reread "The Colour Out of Space" by H.P. Lovecraft, a story composed in March 1927 and published in Amazing Stories in September of that year. I won't analyze the story. Instead I'll just put down some notes.

Here's the cover of the issue of Amazing Stories in which "The Colour Out of Space" appeared:

"The Colour Out of Space" was obviously not the cover story, but the oversized plants give a person pause. Here's a quote from Lovecraft's story:

Stephen Rice had driven past Gardner's in the morning, and had noticed the skunk-cabbages coming up through the mud by the woods across the road. Never were things of such size seen before, and they held strange colours that could not be put into any words. Their shapes were monstrous, and the horse had snorted at an odour which struck Stephen as wholly unprecedented. That afternoon several persons drove past to see the abnormal growth, and all agreed that plants of that kind ought never to sprout in a healthy world.

Below is an image of the dust jacket of Tales of the Cthulhu Mythos, published in 1969 by Arkham House. "The Colour Out of Space" is not in that book, but the monstrous skunk cabbages seem to have made it into Lee Brown Coye's drawing: 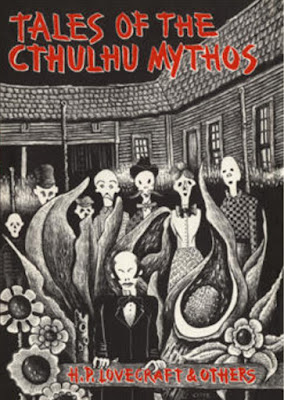 Or maybe that's a jack-in-the-pulpit on the right.

"The Colour Out of Space" had been reprinted two years before in 3 Tales of Horror. Here is Coye's dust jacket design for that book: 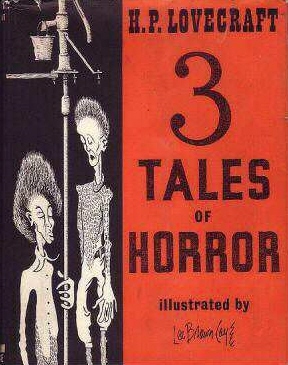 The illustration here is in fact of "The Colour Out of Space." Those are the corpses of Nahum Gardner's two sons, Merwin and Zenas, sunk in the poisoned well outside his house. Today is the anniversary of the death of Thaddeus Gardner, Nahum's oldest son, which took place on October 19, 1882. You don't want to know what happened to him. Or if you do, just read the story. By coincidence, this is also the anniversary of the death of John E. Vetter, a friend of Coye and a fan and collector of Lovecraft. He died on October 19, 2002, at age seventy.

Once you've read enough stories and seen enough movies, they start to stick in your head and the similarities among them stand out. I'm not sure that similarities signify that one writer is influenced or inspired by another or that he or she is copying or swiping from another. I'll just say that I can see similarities among "The Colour Out of Space," The War of the Worlds by H.G. Wells (1897), the movie Invasion of the Body Snatchers (1978) (remember the crumbling?), and The Blob (1958). The Blob is especially like "The Colour Out of Space," at least at the beginning.

In reading about Lovecraft's story, I came across the idea that the author wanted to create a truly alien and incomprehensible being. I was on the lookout for indications of that in "The Colour Out of Space." Nahum Gardner himself says it: