The Adventures of Jules de Grandin by Seabury Quinn (1976)

Seabury Quinn (1889-1969) wrote more stories than anyone for Weird Tales and for a longer period of time, from 1923 to 1952, almost the entire run of the magazine. If my count is right, Quinn placed 146 stories in "The Unique Magazine" in those years. Ninety-three of them were in the continuing adventures of his occult detective, Jules de Grandin. Of those 146, seven were reprinted in The Adventures of Jules de Grandin in 1976. They include the first of the de Grandin stories, "The Horror on the Links," retitled for the book "Terror on the Links."

A dealer at PulpFest recommended the Jules de Grandin stories to me. I have just one of the five Popular Library reprint books of the 1970s. These books are hard to come by at a decent price. I was lucky enough to find one at Half Price Books, one of the world's greatest stores, for just two dollars. I finally finished it this weekend.

Here's what I think: Seabury Quinn set up his series seemingly with the Sherlock Holmes series in mind. Jules de Grandin is French rather than British. Nonetheless, he is, like his predecessor, eccentric and seemingly all-knowing. Eccentric is probably a kind word. I find him to be annoying as all get-out. His assistant, Dr. Trowbridge, plays the Dr. Watson role as recorder and narrator of de Grandin's adventures. Unlike Watson, Dr. Trowbridge is grouchy, obtuse, and practically useless. You can lay the blame at the author's feet.

Despite all that, Quinn was, over all, a good writer. Certain of his scenes are unforgettable, as in "The Man Who Cast No Shadow" when de Grandin destroys a vampire in her grave and discovers another in his underground lair. In short, I will keep looking for the Jules de Grandin books, but not at the prevailing price. One thing dealers should realize is that their clientele is probably beginning to disappear. The generations that first read pulp magazines and even paperback books are passing from the earth. I doubt that the prices they once paid will hold for very much longer. 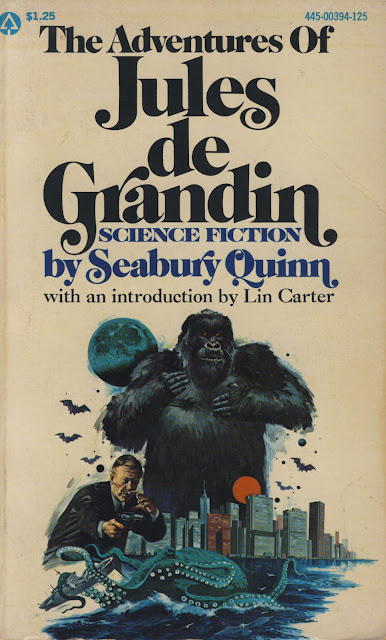