I no longer have access to Ancestry.com or ProQuest or some of the other sources I used when I began writing this blog. These past several months, I have been forced to take a different tack. I would like access to the websites I used before, but I'm making do without them, and it isn't as hard as I thought it would be. The difference between now and years past--even very recently past--is that these days there is so much more information available on non-subscription websites. The rate at which information is proliferating on the Internet only seems to be increasing. I can foresee a time when much of it--maybe all of it--will be free. So what does that mean to the researcher? Well, for one, it makes your life easier, but more importantly, it means that so many of the unknowns are going to drop away. I am seeing that for myself. If unanswered questions are the opposing force, I feel like I'm going to war against an army of cardboard cutouts. There is little resistance to inquiry. The facts are surrendered almost without a fight.

Here's a case in point: In The Collector's Index to Weird Tales by Sheldon Jaffery and Fred Cook (1985), there is listed a writer named Marson Carrere, author of the short story "The Guilty Man" from February 1924. That name, Marson, is a misprint. In the issue-by-issue index in the same book, the name is listed correctly as Marion Carrere. The identity of that person appears to be unknown, at least on the Internet. As I have said before, though, mystery attracts inquiry. The greater the mystery, the greater the intrigue. And the mystery of Marion Carrere went down with little fight.

The surname Carrere is not very common. In doing your research, you should begin with something that is unlikely to bring about your being swamped by thousands of results in your search. So a search for "Marion Carrere" gives this result: 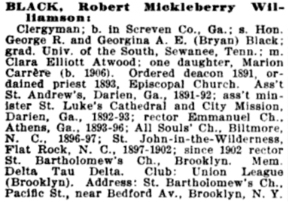 That entry is from Who's Who in New York, 1907, p. 139, and there she is, Marion Carrère, born in 1906 to Reverend Robert Mickleberry Williamson Black and Clara Elliott (Atwood) Black. So in searching for "Marion Carrere Black," I came up with this article:

That article comes from the New York Sun, March 6, 1934, page 3, and tells of Marion Carrere [sic] Black's lineage and of her impending wedding to Regis Vaccaro of New Orleans. So now I had her married name. And what does a search for "Marion Black Vaccaro" give back? Everything.

Marion Carrère Black Vaccaro was a close friend of Tennessee Williams, "at one point," he wrote in his Memoirs, "she was perhaps my most devoted friend . . . ." (p. 63) Williams (1911-1983) and the researchers who study him and his life have written much about her, so I won't duplicate their efforts. Instead, I'll just refer you to their work:
That's a start. There are other sources in print, online, and tucked away in the world's libraries. Philip C. Kolin's article is particularly good and thorough. It gives a window onto worlds that are now gone forever.

Tennessee Williams described his friend Marion as "a well-educated woman with fine taste in literature," adding, "she was a very talented poet." (Memoirs, p. 63) (1) Under the name Marion Carrere, she wrote a little for Breezy Stories, Droll Stories, and Weird Tales. Her only story for "The Unique Magazine" appeared in the February 1924 issue. She had just turned eighteen years old when it was published, and it may have been her first such work. Williams' only story for Weird Tales, "The Vengeance of Nitocris," was published in August 1928 when he was seventeen, and it was his first published story. The two didn't meet until many years later, in 1941. I wonder if they ever talked about their common experience of being teenaged authors for Weird Tales.

In his article on their friendship, Mr. Kolin tells of a book of poems (and one story) handwritten and illustrated by Marion Vaccaro, which came into Williams' possession after her death. Mr. Kolin writes: "[T]he prevalence of death and other pessimistic subjects perhaps suggest Williams's influence." Maybe there are more weird tales from the pen of Marion Carrère waiting to be published. Here are her known credits otherwise:
That's not the end of her work in the worlds of fantasy and science fiction, however. This is the strange part: Marion Black Vaccaro was a production assistant on Wild Women of Wongo, a movie about cavewomen released in 1958.

Marion's later years were marked by health problems and concerns about aging. Marion Carrère Black Vaccaro died on April 14, 1970, in Miami, Florida, at age sixty-four. Tennessee Williams survived her by nearly a quarter century and died on February 25, 1993, in New York City.

As for the unanswered questions that are so rapidly being answered, well, I hope we will always have mysteries, as a universe without mysteries wouldn't be very interesting at all.

Note
(1) Williams called Marion's husband, Regis Vaccaro (1907-1946), "a likable guy" but "the worst alcoholic I have ever known in my life." Drunk, sober, or somewhere in between, he once removed his glass eyeball and flung it at his mother-in-law. It landed in her soup bowl. "[W]ithout a change of expression or intonation," Williams remembered, she dipped it out with her spoon, passed it to Marion, and said to her, "Sister, I think Regis has lost this." (Memoirs, pp. 65-66).

Email ThisBlogThis!Share to TwitterShare to FacebookShare to Pinterest
Labels: Authors, Tennessee Williams, Who Was . . . ?, Women Writers in Weird Tales