If Brinke Stevens were not a real person, she could be a sidekick to Doc Savage or Buckaroo Banzai. Actress, model, screenwriter, and author, Brinke has degrees in psychology and marine biology, has studied foreign languages, including Esperanto, and is or was a member of Mensa. Known as a scream queen, she has appeared in dozens of horror movies. Her first was Necromancy (1972), starring Orson Welles, but it isn't clear to me whether she was in the original, the 1983 reissue--in which she was billed as Berinka Stevens--or both. In 1980, Brinke married artist Dave Stevens (1955-2008). Their marriage lasted less than a year, but she continued to model for him and other artists. Her only story for Weird Tales was the first part of a serial, "The Pandora Principle," with A.E. van Vogt. Her only other credit for fiction in the Internet Speculative Fiction Database is the novelette "Jacking In," published in Stranger by Night (1995).


Born in Iowa, Larry Eugene Tritten grew up in Idaho, served in the U.S. Army for two years, and attended North Idaho Junior College. He studied creative writing at San Francisco State University on a scholarship and lived most of his life in San Francisco, minus his frequent travels overseas. Tritten wrote science fiction stories and travel articles, movie reviews, humorous pieces, and more, over 1,500 articles in his lifetime. His first published science fiction story was "West Is West" in If, August 1968. He contributed to the Chicago Sun-Times, Chicago Tribune, Houston Chronicle, Los Angeles Times, New York Times, and San Francisco Chronicle, as well as magazines, including Harpers, Hustler, The New Yorker, Playboy, Rolling Stone, Travel and Leisure, and Vanity Fair. Like so many of the writers on this list, Tritten had a personal connection to Harlan Ellison, who wrote of him, "I was enormously fond of Larry, of his humor, his goodwill and sense of being proudly, as I am, a simple 'blue collar' artisan."

A.E. van Vogt is considered a giant among science fiction authors of the Golden Age and was among the last to appear in Weird Tales. He enjoyed a long and productive career writing short stories, novels, poems, and essays. His first published science fiction story was "Black Destroyer" in John W. Campbell's Astounding Science-Fiction, July 1939. His series include Null-A, Rull, Slan, the Space Beagle, and the Weapons Shop of Isher. Like Campbell and others in his circle, van Vogt fell for Dianetics and was an associate of L. Ron Hubbard for more than a decade.

Born in Canada, van Vogt moved around as a child, remembering in adulthood:

Childhood was a terrible period for me. I was like a ship without anchor being swept along through darkness in a storm. Again and again I sought shelter, only to be forced out of it by something new. (Quoted in "Man Beyond Man: The Early Stories of A. E. van Vogt" by Alexei Panshin, here.)

This is the realism, and logic, of a small boy playing with toy soldiers in a sandbox. I'm tougher than you. I’ve got a billion spaceships! They’re brand-new. They only took 800 years to develop. . . . There is no intersection with adult reality at any point, for all van Vogt was able to write was that small boy's sandbox game with an adult level of intensity. (From "Letters of Comment," The New York Review of Science Fiction, May 1999.)

Others have had different opinions, of course, but if the facts of biography bear upon an author's work, then Mr. Schweitzer seems to have picked up on something of significance, something that might lead to an understanding not only of van Vogt's writing but also of his interest in Dianetics. In any case, van Vogt wrote two stories for the Bellerophon Weird Tales, part one of a serial, "The Pandora Principle," co-authored with Brinke Stevens and never completed in print (Fall 1984), and "The Brain" (Winter 1985). If I read the Internet Speculative Fiction Database correctly (always a problem with its cumbersome system of cataloguing), "The Brain" was his second to last magazine story.


J.N. Williamson was primarily a writer of horror stories and novels. He also wrote non-fiction. Williamson authored more than forty novels and collections and more than 100 short stories. "The Bus People," his only story for Weird Tales (of which I am aware), came near the beginning of his career. Williamson received a lifetime achievement award from the Horror Writers of America in 2003. He was born in my native city of Indianapolis; graduated from Shortridge High School, as did Kurt Vonnegut (1922-2007); and attended Butler University, as did James Alexander Thom (b. 1933), who, like Williamson, majored in journalism. I wonder if they knew each other, or if my uncle, who sat next to Mr. Thom in English class at Butler, also knew the man who would later become a writer of horror stories.


Although Bellerophon was not the miner of old stories that Sam Moskowitz was in the Weird Tales of the 1970s, it nonetheless uncovered works from long-gone authors, including "Vengeance by Proxy" by John Wyndham, originally in Strange Stories in February 1940. Born before the Great War, Wyndham, né Harris, was shaped by that conflict and its sequel, in which he took part as a public servant and a soldier who landed at Normandy after the first wave. By then he had already been contributing to American science fiction and fantasy magazines for more than a decade, his first story, "Worlds to Barter," having been published in Wonder Stories in May 1931. Readers of today might best remember him as the author of The Day of the Triffids (1951) and The Midwich Cuckoos (1957), filmed as The Village of the Damned (1960). The first book has had some influence, consciously or not, on our current mythology of zombies. (Like The Walking Dead, it opens in a hospital when an unaffected man awakes to a post-apocalyptic world.) The second speaks presciently about a current and very real invasion of Europe and the inadequacy of Western liberalism in defending itself against threats from the outside. 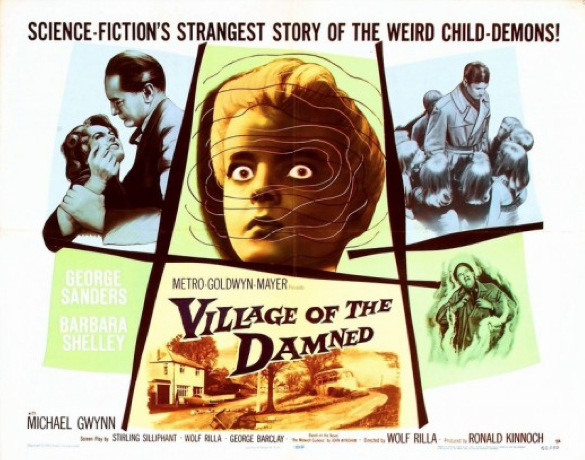