The third mystery concerning the artist Clare Angell isn't a mystery so much as a possibility, and it isn't really essential to understanding his life or work.

Angell is a common name in some places in the East. One of those places is Providence, Rhode Island. In fact, there is a street in Providence called Angell Street. At 494 Angell Street, there is a large house, once home to a family named Lovecraft. On August 20, 1890, the last male child in America with that surname was born in that house. He was christened Howard Phillips Lovecraft. In 1926, H.P. Lovecraft penned a story called "The Call of Cthulhu." One of the characters in that story is named George Gammell Angell, almost certainly after one of Lovecraft's own ancestors and an unknown Angell of Providence. So was Clare Angell the artist descended from the Angells of New England? Maybe. We may never know. But like I have said before, if you draw any line long enough, it becomes a circle, and so a connection to Weird Tales eventually meets another connection to Weird Tales.

The last mystery of Clare Angell concerns this drawing, reprinted in Weird Tales in the Winter issue of 1985: 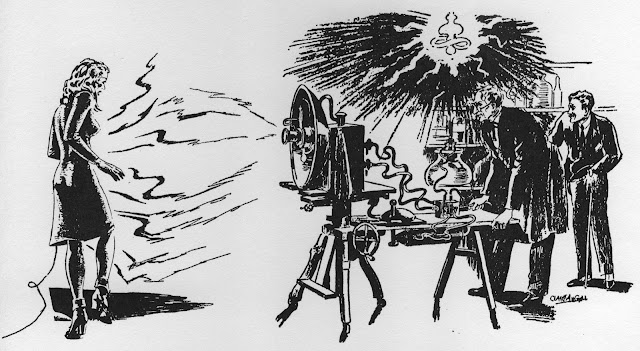 The first thing to take care of here is the signature and the artist's credits. The Internet Speculative Fiction Database (ISFDb) gives the artist's name as "Clare A. McGill." The misreading of the signature is understandable. If I hadn't already written about Clare Angell, I might have looked right past his name myself. But there's no doubt in my mind that Angell was indeed the creator of this illustration--or at least the right side of it.

One of the things I have noticed in looking over the Bellerophon issues of Weird Tales is that some of the illustrations appear to be amalgamations of drawings, either two old drawings fitted together, or a collage of an old drawing and a new drawing to make the old drawing fit a new story. There is something a little odd about the drawing above, attributed as a whole to "Clare A. McGill." The men on the right are dressed in early twentieth-century costume. The woman on the left is obviously a creation of a later period, probably no earlier than the 1920s. Also, the perspective is off: she's a giant compared to the men. And note the mostly blank area separating the two sides of the picture, which are linked by a few scribbled lines. Lastly, she seems to have been drawn in a different style or with a different technique than the men on the right. I would not be surprised to learn that she was drawn by a different artist.

So I guess here is the issue: If this is one drawing created by Clare Angell, then it seems to have been drawn for a science fiction magazine of the 1920s or '30s. But Clare Angell is not elsewhere on the website of the Internet Speculative Fiction Database. Did he slip through the cracks somehow? If this is an amalgamation of two drawings, then maybe the right side of the drawing came from one of the many books illustrated by Clare Angell in the early 1900s and the Internet Speculative Fiction Database is correct in not giving him any pulp magazine credits, even if he lived into the pulp magazine era (assuming the death date of 1932 is correct). Still, the right side of the drawing obviously illustrates a science-fictional scene, so I guess we had better track down Clare Angell's credits as an illustrator and make a case that he belongs somewhere on the ISFDb.

Note
(1) They were married on August 5, 1872, in Mason County, Michigan, not long after the deaths of Eugene Angell's parents.

Email ThisBlogThis!Share to TwitterShare to FacebookShare to Pinterest
Labels: Artists, Weird Tales in the 1980s