Dudley Stuart Corlett was baptized on February 15, 1880, at All Saints Church in Benhilton, Sutton, Surrey, England. Presumably, he was born shortly before that, probably in the first half of February 1880. His parents were Stuart N. Corlett and Flora Corlett. His mother's name was fitting, for Dudley S. Corlett became an expert in tropical agriculture and an officer in the operation of botanical gardens in Ceylon and the United States.

Corlett traveled in Latin America, the Caribbean, and the United States and served in the oriental service of the British army, attaining in his twenty years of service the rank of captain. He was stationed for a year in Abyssinia (Ethiopia) and knew Emperor Haile Selassie. Corlett also served in India, Egypt, and Sudan. For four years, he was director of the Economic Experiment Station at Peradiniya Botanical Gardens, Ceylon. An article from 1935 observed: "He was in close touch with eastern peoples, their religions, and customs, and made a special study of archaeology and ancient philosophies." (1)

From about 1920 onwards, Dudley S. Corlett lived in the United States, in southern California. There he worked as an author, public speaker, and secretary of the California Botanical Garden Association. He was also on the Board of Governors of that organization with William Randolph Hearst, Douglas Fairbanks, and Mary Pickford, among others. He may have lectured on tropical agriculture at the University of Southern California. He also gave lectures to clubs and other groups on botanical gardens, China, Egypt, Abyssinia (Ethiopia), the Mayan Indians, and so on. Among his other topics was the theory that the lost continent of Atlantis was the birthplace of mankind. A list of Corlett's articles and other works:
Dudley S. Corlett was also the author of a play called Amber from about 1926 and one story (with Bruce Bryan) for Oriental Stories, a short-lived companion magazine to Weird Tales. He died of heart failure on January 25, 1946, at 58 Rue el-Assa, Tangier, Morocco.

Further Reading
Numerous articles by and about Corlett are available on the Internet. 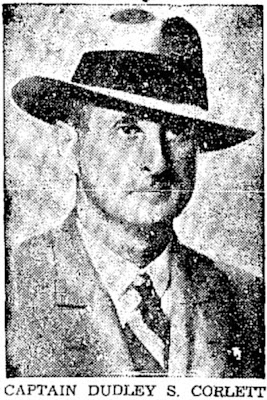