Kirke Field Mecham was born on December 20, 1889, in Mankato, Kansas. Before the Great War, he was a stenographer for the Southwestern Journal in Kansas City, Missouri. On October 25, 1917, he enlisted in the U.S. Army and served overseas with the 137th Infantry, 35th Division. Mechem's unit arrived on the front lines in France on June 18, 1918. Several months of heavy fighting and heavy casualties followed. After the Armistice of November 11, 1918, Mechem served as editor of The Jayhawker in France, a service paper. He also wrote poems and other pieces for papers back home. He was released from service on May 10, 1919.

Kirke F. Mechem was at various times in his life editor of The Legionnaire, a paper of the Thomas Hopkins Post of the American Legion in Wichita, Kansas; editor of The Price Current, a commercial newspaper; and author of poems published in Harper's Magazine, The Saturday Evening Post, Weird Tales, and newspapers in Kansas and elsewhere. He wrote at least two plays, Who Won the War? (1928) and John Brown (1938), which won the Maxwell Anderson Award. Mechem wrote John Brown while on a thirty-day vacation spent in a Santa Fe railroad caboose on Wakarusa Creek. Living on salmon, potatoes, and coffee, Mechem wrote out his play in longhand while he reclined in a caboose bunk.


Mechem's son, Kirke L. Mechem (b. 1925) is a well-known composer of choral music and other works. The elder Mechem's wife Katherine was a pianist.

Further Reading
Mechem's articles for the Kansas Historical Quarterly, listed above, are available on the Internet. 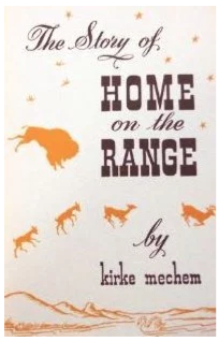