A Wretched Thing or Two

It was May 1950 and time to do a wretched thing or two. Astounding Science Fiction got the ball rolling by printing "Dianetics: The Evolution of a Science" by L. Ron Hubbard in that month's issue. On May 9, 1950, Hermitage House issued the book-length version, Dianetics: The Modern Science of Mental Health. Astounding editor John W. Campbell, Jr., had a big hand in both of those works of pseudo-nonfiction. In 1949-1950, he and Hubbard had collaborated in the development of Dianetics, even if it was initially a product of Hubbard's diseased mind. Unlike inheritance or relativity, Dianetics was an invention--ultimately an artifice--rather than a discovery. Campbell might be considered Hubbard's co-inventor.

A few years before Dianetics arrived on the scene, Raymond A. Palmer had parlayed the Shaver Mystery into vastly increased sales for Amazing Stories. The publication of Hubbard and Campbell's new pseudoscientific bible led to a jump in sales for Astounding Science Fiction, too. In 1949, circulation was at 75,000 copies per month. In 1950, monthly sales neared 100,000 copies. (1) Maybe Hubbard and Campbell had paid attention while the Shaver Mystery raged in science fiction circles. Maybe they saw an opportunity in what they thought of as a far more significant discovery. Call it Dianetics as Mantong. In any event, Dianetics stormed into the popular imagination in 1950-1951.

In a chapter of his book Astounding (2018, 2019) entitled "The Dianetics Epidemic," author Alec Nevala-Lee writes that by the summer of 1950, the hardbound version of Dianetics was selling 1,000 copies per day. (2) Like our own coronavirus, it raced through the American populace. Some succumbed, like A. E. van Vogt. Others showed strong resistance. In a sort of colloquium published in Marvel Science Stories, May 1951, Lester del Rey began his con to Hubbard's pro position with this observation:

The secret feeling that you're basically superior to your fellow man is probably more typically human than anything, except the related doubt that you're superior to anyone. Racism is based on the need to believe in superiority, and one of the basic factors underlying many neuroses is the doubt of even equality. (p. 116)

Philosopher and longshoreman Eric Hoffer--like del Rey writing just six years after the destruction of the Nazi regime--came to the same kind of conclusion in The True Believer, that the man who believes himself superior may hold in his secret heart a contrary feeling of crushing inferiority. That seems to have been a general feeling among certain readers, fans, and writers of science fiction from the 1920 and '30s onward. It became more specific in the Superior Man-type story so common in Astounding Science Fiction during the 1940s. Maybe by 1950 Campbell felt that what was needed was to move that concept from fiction into fact, thus Dianetics. Ten years later--in January 1960--Astounding Science Fiction became Analog Science Fact & Fiction. In explaining the name change, Campbell wrote: "The science fiction we run in this magazine is in actual fact a good analog of the science facts to come." (3) Never mind that he had moved on by then from one failed pseudo-quasi-science to another. 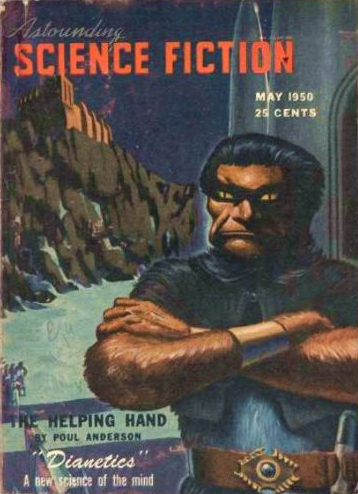