Binny Koras, known as "the Gypsy poet," was the pseudonym of a man named Alexander Rice. Rice was born in about 1895. According to a newspaper article from 1922:

[He] grew up on the highways and byways of middle America, lived in Australia for several years, served during the war as a psychiatric nurse and since returning to the United States in 1919 has been engaged in newspaper writing, teaching and work with boys. A student of oriental languages, he has translated verses from the Japanese, Arabic, and Urdu. (1)

Alexander Rice was managing editor of the Davenport (Iowa) Tribune and a boys' secretary and director of the YMCA in Davenport. He also taught vocational school for ex-servicemen after the war. In 1922, he got a job with Neuhaus and Son of St. Louis to take paintings by important American artists on the road for exhibition. Rice, who was an artist himself, would also give lectures on these paintings.


As Binny Koras, Rice had poems in Dial, Nation, Pagan, Pearson's, Shadowland, and Survey. His poem "Growing Up," originally in the Rock Island Argus (Illinois) and reprinted in The Literary Digest, The Bookman, and Anthology of Newspaper Verse for 1921, was called by the same article "perhaps the most widely printed verse of 1921." He had one poem in Weird Tales, "For Clytie," in the issue for November 1926.

Oddly enough, Koras was also an occultist and was listed in Who's Who in Occultism, New Thought, Psychism and Spiritualism, compiled and edited by William C. Hartmann, and published in 1927 by The Occult Press of Jamaica, New York. Here is the entry on Koras in its entirety:

He was evidently involved in socialist causes, too, which are, as we now know, just another form of superstition or occult activity.

Binny Koras submitted his verse to newspapers from addresses in Davenport, Iowa; Mattoon, Illinois; and St. Paul, Minnesota. His nickname, "the Gypsy poet," may have come from his wandering ways, but he also claimed Romany ancestry. Unfortunately I have not been able to find out anything more on Alexander Rice or Binny Koras, including his dates and places of birth and death.

Here are some poems by Binny Koras, perhaps his complete poems extant:

We all did, then:
Pat, who could throw any kid in town,
And Don, who went to the Advent church.
And said the world was coming to an end
In Nineteen-hundred,
And Brick Top and Eppie and Skin and Spider.

We all wanted to grow up
And become pirates and millionaires and
Soldiers and Presidents and
Owners of candy stores.
And all the time we were eating home-cooking
And wearing holes in our pants,
And talking Hog-Latin
And doing what two fingers in the air
Stood for;
And saving stamps.
And making things we read about
In The Boys' World.
Do you know how to play mumble-de-peg,
And skim rocks,
And tread water,
And skin the cat?
Do you know what a stick on the shoulder stands for
And what "Commggery, wiggery, meggery" means?

Skin is running a wheat farm, now,
Up in North Dakota.
Pat is on the road
Selling something or other.
Brick Top never grew up, quite,
And was making darts for a kid of his own
When I saw him last.
And Spider is yelling his head off
About Socialism and the class struggle
On street corners.

Don was with the Rainbow Division when the world ended.

Yesterday I heard a little freckle-face
Whistle through his fingers
And tell a feller called Curley
What he was going to do when he grew up. 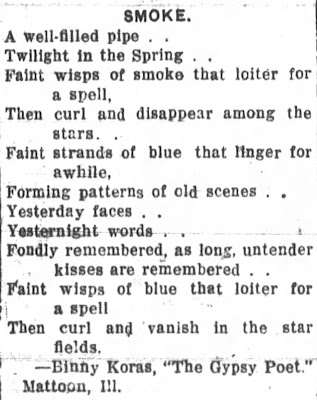 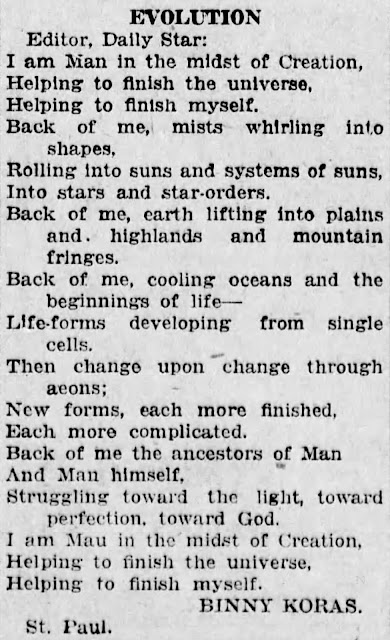 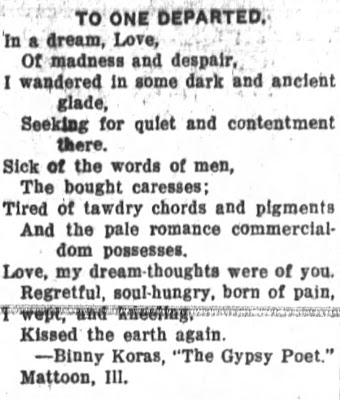 Email ThisBlogThis!Share to TwitterShare to FacebookShare to Pinterest
Labels: Authors, Authors of Australia and New Zealand, Poetry, Who Was . . . ?