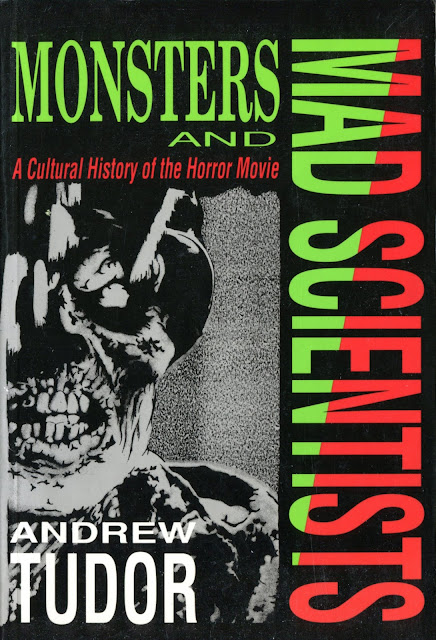 When Monsters and Mad Scientists was published, Andrew Tudor was Senior Lecturer in Sociology at the University of York. He was film critic for New Society from 1975 to 1982, head of his university Sociology Department from 1988 to 1995, and head of its Department of Theatre, Film and Television from 2006 to 2010. He is now retired.

Dr. Tudor is a scholar and a sociologist. Consequently, Monsters and Mad Scientists is scholarly, sociological, and at least semi-scientific. He begins his study by laying out three pairs of what he calls oppositions, all in regards to the threat in the horror movie. These pairs are: 1) The supernatural vs. the secular (what I have called the scientific); 2) The external vs. the internal, that is, threats that are external or internal to the individual person; for example, a vampire is an external threat, but disease is an internal threat; and 3) dependent vs. autonomous; for example, the slave-type zombie is dependent, whereas the vampire, again, is autonomous. Dr. Tudor presents these oppositions in tabular form. A subsequent table lists types of monsters by the number of movies in which they appeared from 1931 to 1984. Zombies ranked eleventh, with forty-eight movie appearances. (Psychotics were first with 271 movie appearances.)

In his analysis of horror movies, Dr. Tudor discusses White Zombie. It's worth noting that, although sociology as a discipline tends to be leftist in orientation, Dr. Tudor's discussion is entirely absent of political content or interpretation. (1) Instead, he writes:


That there is an underlying sexual element to [Legendre's] domination [of the film's heroine], however, can hardly be doubted. In turning Madeline into a zombie he makes her entirely compliant to his will, although nowhere does the film fully draw out the implications of that absolute power. (p. 32)

Later, the author relates zombie movies as a group to "the psycho-movie":


Ultimately descended from the hugely influential Night of the Living Dead (1970) [sic], this group includes The Crazies (1978), Zombies (1980), Zombie Flesh-Eaters (1980) and Zombie Creeping Flesh (1982), all of which postulate the spread of dehumanizing 'disease' and present an apocalyptic vision of total social collapse. In effect, they create a world of mass psychosis in which we are doomed to decline into a subhuman state. Unsurprisingly, given their thoroughly apocalyptic tone, they all end with the implication that the 'disease' will continue to spread unchecked. (p. 71)

Again, as in Caligari's Children, there is the implication that the zombie apocalypse movie appeals most to viewers who are already living in a state of despair, extreme alienation, or at the ends of decadence, and that those viewers may also be essentially nihilists or extreme anarchists, not in a political sense, but in a philosophical and ultimately spiritual sense. Again, the zombie apocalypse seems to be a positive fantasy for those who would like to see the world destroyed or who, in their descent into "psychosis," would like to take the whole world down with them.

There is a good deal more on zombies in Monsters and Mad Scientists, too much, really, to discuss here but all of it piercing in its analysis and fascinating in its insights. It's clear that Andrew Tudor is from a previous generation of scholars, those whose work seems to be unpolluted or undistorted by Marxist interpretation. Now, in 2017, it may be too late for anything like it.

Note
(1) This is in no way to imply that Andrew Tudor is or was leftist in orientation.

Email ThisBlogThis!Share to TwitterShare to FacebookShare to Pinterest
Labels: Zombies