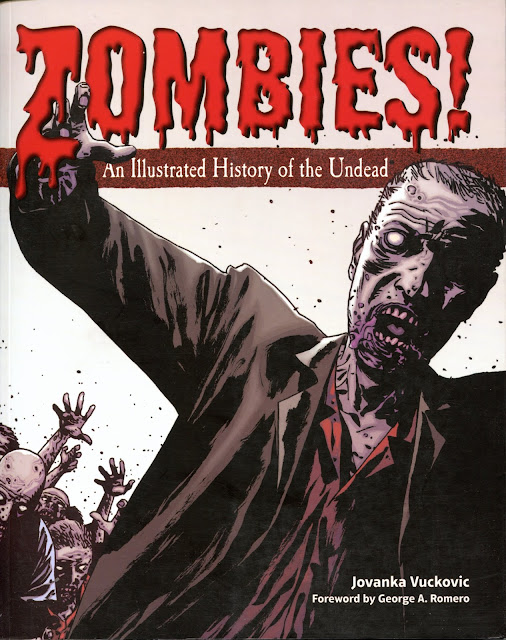 Zombies! An Illustrated History of the Undead is a popular, pictorial history of zombies in movies, television, comic books, and popular fiction. The author, Jovanka Vuckovic, is a Canadian writer, editor, and moviemaker. She was editor of Rue Morgue Magazine for six and a half years. I'll leave the details to her, but I would like to provide these quotes from Ms. Vuckovic's book:

It's not surprising belief in the zombie flourished during that time [i.e., during the French colonial period], given the large number of seemingly mindless, and near lifeless, drones working on plantations. Robbed of their individuality and free will, the beaten-down African slave worker would have surely had the appearance of the living dead. (p. 20)

Because a person's most valued possession--especially in a cruel slave nation--was their [sic] individuality, the Haitians' primary fear was not of being attacked or eaten by a zombie, but of becoming one themselves. It was considered a fate worse than death, the ultimate horror, particularly after the Haitian revolution, during which the nation finally overthrew its European oppressors. (p. 20)

I don't think I have to remind anyone at this point that those "European oppressors" were, first, feudal-statist overlords, afterwards, leftist-statist overlords. Contrary to the most fervent hopes of American academia, they were decidedly not capitalists.

Ms. Vuckovic again brings up a good point, that zombie-ism is, at its heart, about a loss of freedom, humanity, and individuality. The modern state, whether socialist, communist, fascist, or nazi in its permutation, seeks to reduce its populace to interchangeable (and highly dispensable) ciphers, essentially to zombies, hence, I think, the fear of zombie-ism in the world today, at least in a large part.

Two more points: First, Jovanka Vuckovic also points out in her book the sensationalism of zombie stories of the 1920s and '30s. In my research, I have sensed the same thing, that there may be more sensationalism than reality in those stories. I wonder how much of the beginning history of zombies in America was true and factual and how much of it came from the imagination--or at least the exaggerations or interpretations--of William B. Seabrook.

Second, she writes about an author I hadn't encountered before: Captain John Houston Craige (ca. 1886-1954) of Pennsylvania. Like Arthur J. Burks, Captain Craige served with the U.S. Marine Corps in Haiti during the American occupation. And like William B. Seabrook, he wrote about his experiences and observations in non-fictional form. His books included Black Bagdad [sic]: The Arabian Nights Adventures of a Marine Captain in Haiti (1933) and Cannibal Cousins (1934).

According to the website Encyclopedia.com, Captain Craige read up on Haiti in the works of "the French historian Moreau de Saint-Méry (1750-1819), the Haitian historian Thomas Madiou (1814-1884), and the Haitian writer Louis-Joseph Janvier (1855-1911), among others." The source is suspect, but those authors might be a good place to start in pushing the origins of zombies as the walking dead to before 1928. For example: Moreau de Saint-Méry used the word zombi, meaning revenant, in writing, in French, in 1792. Knowing that leads me to the book White Zombie: Anatomy of a Horror Film by Gary D. Rhodes (2001), an even more thorough and scholarly book than Zombies! (1) In fact, Dr. Rhodes' book might be the last word on the history of zombi(e)s in America. It also includes a tantalizing discussion of H. Bedford-Jones' novel Drums of Damballa (1932) and its sources, which are supposed to have been documents or materials, brought from Haiti to the United States in 1803, that mention zombi(e)s. I wish we had more on this. There is no telling what those materials might reveal. One thing all of this reveals is that some American academics, like Dr. Rhodes, do their homework, and some--too many to name here--apparently don't.

Note
(1) That book reveals, surprisingly, that there is a connection between zombie-ism and the consumption of Jamestown weed, also called jimsonweed or Datura, in the form of "concombre zombi," a concoction for inducing the condition in an unsuspecting person. Once again, jimsonweed raises its (seed)head in relation to the supernatural and weird fiction.