A man named Charles Henry Mackintosh wrote for Weird Tales and another man named Charles Henry Mackintosh was an Anglo-Irish preacher of the nineteenth century. They were two and not one, though the second (chronologically) was likely named for the first. The first Charles Henry Mackintosh was born in Ireland in 1820 and died in England in 1896. The second was born on March 4, 1885, in England and died on February 16, 1947, in Daytona Beach, Florida. That Charles Henry Mackintosh arrived in the United States in 1907 and lived in Duluth, Minnesota, from about 1909 to about 1917. When he filled out his draft card in September 1918, he was living in Washington, D.C., and working as an editor for the Federal government. (A contemporary article says that he came from the "northwest" to work in the nation's capitol. I guess if you live on the eastern edge of the continent, Duluth is in the northwest.) I believe Mackintosh's work was for a publication called Four Minute Men News, of which he is known to have been editor. He was also chairman of the Four Minute Men organization.

The Four Minute Men is new to me. I had never heard of it before and I had to read up on it in order to write about it here. And I had to translate a German-language Wikipedia page to do it. (Sometimes the Internet reminds me of the pterodactyls on The Flintstones, chiseling out words on stone tablets. That's how primitive the thing is.) Anyway, the Four Minute Men was a volunteer organization of speakers who worked for the Committee on Public Information, more or less a propaganda arm of the U.S. government, and who spoke on the war effort during the four minutes it took to change reels in the nation's movie houses. Charlie Chaplin was probably the most famous four-minute man. Mackintosh's work for the organization probably lasted for as long as the Four Minute Men lasted. If I read the German Wikipedia page correctly, the last talk took place on Christmas Eve 1918 with a tribute to the Allies who had prevailed in the Great War.

Charles Henry Mackintosh did all that work for a country not yet his own: he became a naturalized citizen on September 21, 1920, in Illinois. He lived in Chicago in the 1920s, and in Daytona Beach, Florida, in the 1930s and '40s. He seems to have called Honolulu home for a while as well. While in Duluth, he was chairman of the Stewart-Mackintosh Company. Upon returning to civilian life after the war, he served as president of the Direct Mail Advertising Association, president of the Associated Advertising Clubs of the World, and general sales and advertising counsel for Lasalle Extension University. In those capacities, he toured the country giving public addresses. He seems to have been a man made for the go-get-'em attitude of the 1920s.


Mackintosh was also a writer. In addition to four stories and letter in Weird Tales, he wrote the following (I assume these all to have been the work of the same man):
His story "Guardians of the Guavas," from Weird Tales, September 1930, was reprinted in At Dead of Night, edited by Christine Campbell Thomson (aka Flavia Richardson) and published in 1931.

I didn't find much on Mackintosh except for lots of articles about his public appearances, but keep looking. Maybe you'll find more than I did. 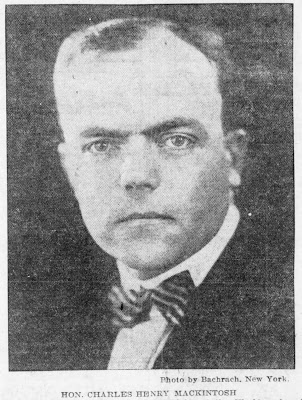