On May 14, 2016, I wrote about Christine Campbell Thomson, editor of the Not at Night series of weird tales in hardback. Today I'll write a little on her first husband. He was born Richard Martin Oscar Cook on March 17, 1888, in Tollington Park, Islington, England. From 1911 to 1919, Cook served in the British civil service in North Borneo. By 1920, he was back in his home country. In the early 1920s, he wrote about his experiences in Borneo. In the process of having his book published, Cook met Christine Campbell Thomson (1897-1985), a literary agent and editor. She had the book placed with the house of Hurst & Blackett, and it was published in August 1924 as Borneo: The Stealer of Hearts. Cook had still more stories of Borneo published in The Blue Magazine, Hutchinson’s Adventure-Story Magazine, Hutchinson’s Mystery-Story Magazine, and The Novel Magazine. He and Christine were married on September 30, 1924, in London and divorced more than a decade later, in 1937 or 1938.

I don't suppose that anyone now knows what relationship Christine Campbell Thomson had with Farnsworth Wright, editor of Weird Tales from 1924 to 1940. Suffice it to say that of the 170 stories published in the Not at Night series, 100 came from Weird Tales; that the Not at Night series (1925-1937) was published during the years that Wright was still editor and Weird Tales was still based either in Indianapolis or Chicago (1924-1938) and had not been sold to Short Stories, Inc., or had moved to New York City; and that Christine secured for Wright a number of stories by British authors--including herself and her husband--for publication in Weird Tales. I wonder if she was on the lookout for stories by Continental authors as well and whether that's how certain stories by such authors ended up in the pages of the American magazine. I wonder, too, if she ever traveled to the United States, and if so, if she ever met her American counterpart.

His story "Boomerang," retitled "The Caterpillar," was adapted to television in Rod Serling's Night Gallery and broadcast on March 1, 1972. Cook was also author of the novel The Seventh Wave (1926) translated into Dutch as Gij zult niet.

Oscar Cook's Stories in Weird Tales
See the list of short stories above. 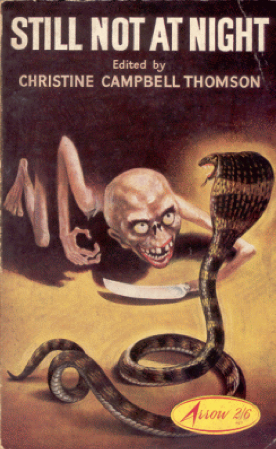