Five years ago, I wrote an entry called "Women Writers in Weird Tales" in which I gave some figures from Eric Leif Davin's book Partners in Wonder: Women and the Birth of Science Fiction, 1926-1965 (2006). Among those figures is a list of the most prolific women writers of fiction in the pages of Weird Tales. Third on that list, after Allison V. Harding and Mary Elizabeth Counselman, is G.G. Pendarves. I believe that Allison V. Harding was actually a man, actually the associate editor of Weird Tales, Lamont Buchanan. If that's true, then G.G. Pendarves had the second-most stories in Weird Tales among women. And yet very little to nothing is known of her.

G.G. Pendarves was the nom de plume of Gladys Gordon Trenery. I hesitate to call it a pseudonym as it could easily have been her married name. No one seems to know. No one knows her birthplace, either. According to the Internet Speculative Fiction Database, she was born in Cornwall. An index of births in England and Wales gives a Gladys Gordon Trenery as having been born in Lancashire in January 1885. The 1901 Census has her living in Birkenhead, Cheshire, with a birthplace in Stonycroft, Liverpool. That Gladys Gordon Trenery was sixteen years old at the time and living in a large household that included Grace H. Trenery, age fifty-five, and Elizabeth B. Trenery, age fifty-three. There were Trenerys in Cornwall to be sure. Maybe that was where the family originated before moving to Merseyside or its adjoining counties. It seems safe to assume that either Grace H. or Elizabeth B. Trenery was her mother.

So Gladys G. Trenery was sixteen years old in 1901. The next (and only other) record I have for her is her passing of her examination as a teacher in the playing of pianoforte at the Royal Academy of Music at Christmastime 1907. She would then have been just short of her twenty-third birthday. G.G. Trenery contributed "Yesterday, Today, and Tomorrow" to The Horn Book for November 1931. Otherwise, all of her known stories were in Argosy All-Story Magazine, The Magic Carpet Magazine, Oriental Stories, and Weird Tales, all from 1926 to 1939. Her last three stories in "The Unique Magazine" were published posthumously, as Gladys G. Trenery died on August 1, 1938. That sad event is lost among the deaths of Robert E. Howard and H.P. Lovecraft from the previous two years. Incredibly, Ramsey Campbell, who was born in Liverpool on January 4, 1946, had a neighbor named Gladys Trenery. She looked after him when his mother was taken to the hospital after cutting her hand on broken glass. You can read about that event in "An Interview with Ramsey Campbell" from July 23, 2013, here. That makes me wonder whether the death date of G.G. Pendarves is correct or if the name Galdys Trenery was really common enough for it to have been given to one teller of weird tales and to the babysitter of another.*

Look for reprints of G.G. Pendarves' stories in various anthologies and reprint editions, including in The Eighth Green Man (and Other Strange Folk) (1989). The title story was one of only five stories reprinted twice in Weird Tales. "The Sin-Eater," also by G.G Pendarves, was another. 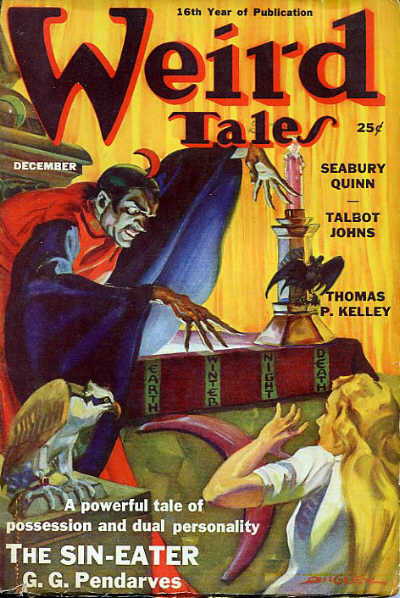