Last week, commenter Iberdot left an excellent summary of the argument in favor of intelligent life in the universe. I'll quote him or her:

I think his or her allusion is to the famous Drake Equation, developed by Frank Drake (b. 1930), which, truth be told, can be used to "come up with any number you want": 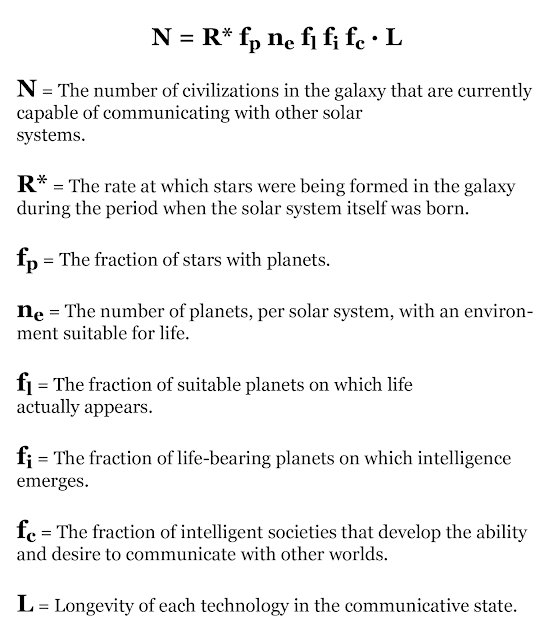 (From: We Are Not Alone: The Search for Intelligent Life on Other Worlds by Walter Sullivan [McGraw-Hill, 1964].)

I think the Drake Equation is an exciting and thought-provoking idea, but it can't really be thought of as a way of reaching a surefire answer. And I don't think it was meant to. I think it was meant only as a jumping-off point for discussion. Anyway, as soon as I read Iberdot's comment, a cartoon by Sidney Harris (b. 1933) leaped into my mind. Here it is: 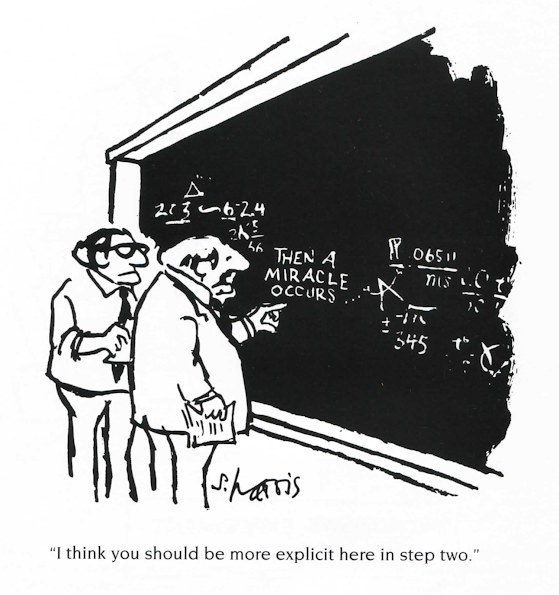 Science is not supposed to be about miracles or counting on miracles, nor is it supposed to be about wishing or faith or superstition. And yet we have so-called "science" and scientists doing just those things, not just about stars and extraterrestrials but about all kinds of things. Anyway again, a lot of astronomers, astrophysicists, planetologists, cosmologists, and just plain laymen and -women seem to believe in these magical expressions: insert a miracle into the Drake Equation and you have proof that there are other intelligent species in the universe. They sound like a lot of emotional teenagers, telling themselves in the dark, "It has to be true, it just has to be true, my life won't be complete unless it's true . . . "

Maybe someday I will be proved wrong and we will discover that there are other intelligent species in the universe. That would be an exciting thing, too. But until there is proof, I think that every science-minded person has to remain skeptical on this question. Or, as Carl Sagan (1934-1996) said, "Extraordinary claims require extraordinary evidence." You can have faith, but that goes somewhere else, in a different box not called science.