A few days ago I saw an old article about the American economy that grabbed my attention. It's called "The U.S. Economy Will Never Have Another Golden Age," and it's on the website of Marketwatch, dated September 1, 2017. The author has the perfect name for a journalist who writes about economics and finances: Howard Gold.

What grabbed my attention is Mr. Gold's first sentence: "It was the Golden Age of the U.S. economy, the quarter century between 1948 and 1973, when the U.S. reigned supreme, manufacturing flourished and the American middle class prospered." Those dates jumped out at me: 1948 to 1973. Add a year on to the beginning and you have the brackets of what I call the Flying Saucer Era, 1947 to 1973.

Now, there isn't necessarily correlation, causation, or significant association among these kinds of things, but I wonder if there's a way of explaining why "the Golden Age of the U.S. economy" and the Flying Saucer Era were coincident. A conspiracy theorist might notice that 1973 was also the year that the United States went off the gold standard. Another coincidence? Ask Mr. Gold.

Last year I wrote about Beyond This Horizon by Robert A. Heinlein (1942). While I was reading, I made a list of possible innovations in Heinlein's futuristic (and vaguely dystopian) novel. These include:

One of his innovations interests me especially. In a passage about the possibility that there are aliens superior to us in intelligence in the universe, Heinlein wrote:

It has been pointed out that it might be extremely dangerous, psychologically, for human beings to encounter such superior creatures. (Signet, p. 125)

Heinlein should apologize from the grave for his use of the passive voice, for how are we to know who did the pointing out? Anyway, that idea--that people can't handle knowing that there are aliens out there in the universe or even here on Earth--has become a cliché, an unquestioned pseudo-fact that everyone simply knows to be true. It has also helped for decades to fuel conspiracy theories.
So who says that people can't handle this kind of knowledge? Where did that idea come from? Was Heinlein in fact the originator of it? And why 1942? Well, if we're looking for explanations, maybe we should look at dates, events, and the state of the world at the time. For one, there literally were aliens threatening the American people and our way of life in the form not only of the Axis Powers but also of communists and socialists, who had been at their dastardly (there's an old-fashioned word) work for at least a couple of decades before World War II began. There were also perceived threats presented by resident aliens, recent immigrants, or people who just happened to look different or who had foreign-sounding names. In times of national stress, people often lash out at what is called "the other" in their midst. But . . .
The simplest explanation might be that there had in fact been a panic involving space aliens only shortly before Robert Heinlein wrote. It happened on October 30, 1938, when Orson Welles and his Mercury Theatre radio company presented a semi-journalistic version of The War of the Worlds by H.G. Wells (1897, 1898). Two years later, Princeton University Press issued a study of the phenomenon in The Invasion from Mars: A Study in the Psychology of Panic by Hadley Cantril (1940). I'm beginning to suspect that the broadcast and its aftermath is where the idea originated, and an unquestioning culture of conspiracy has swallowed it whole and then regurgitated it nonstop for the last eighty-two years. And they have glommed on to the idea that the U.S. government knows all about it and is hiding that knowledge from us. My questions are these: Have conspiracy theorists never worked in government? Do they not know by now that most--nearly all--of the people who make up an organization, maybe especially a governmental organization, are essentially incompetent in carrying out any great thing? People are not very good at running conspiracies or keeping secrets--probably not at all good at it across generations--especially when it involves what would surely be one of the biggest stories of the century (other than what is President John Gill's favorite flavor of ice cream). The idea of a decades-long U.S. governmental conspiracy with hundreds, if not thousands, of people engaged in covering up the existence of aliens is pretty ridiculous when you think about it.
Anyway, I suspect that most people wouldn't have any problem at all learning that there are intelligent aliens out there, and I think that most would just go back to whatever they were doing before, which is looking at cat videos and playing computer games. 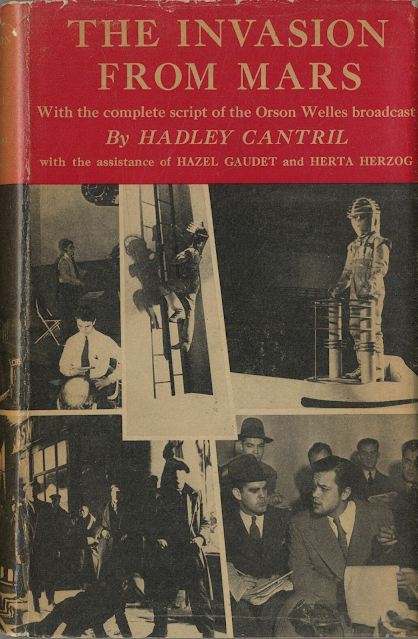 Email ThisBlogThis!Share to TwitterShare to FacebookShare to Pinterest
Labels: Flying Saucers and Aliens from Space, H.G. Wells, Robert A. Heinlein