On the evening of October 30, 1938, The Mercury Theatre on the Air presented a radio adaptation of H.G. Wells' War of the Worlds (1897, 1898). Orson Welles, John Houseman, and Howard Koch were the scriptwriters, but Koch seems to have gotten sole and final credit for what his later book (1970, 1971) called "The Panic Broadcast."

Nearly nineteen years later, on September 9, 1957, the CBS television show Studio One presented the story behind the story in "The Night America Trembled." As it happens, the screenwriter for that live broadcast, Nelson S. Bond (1908-2006), was also a teller of weird tales: from 1940 to 1944, he had seven stories published in "The Unique Magazine."

Another eighteen years passed before ABC-TV broadcast another version of the story behind the story in the film The Night That Panicked America. The date was October 31, 1975. The screenplay was by Nicholas Meyer and Anthony Wilson. Mr. Meyer has his own genre credits, including entries in the Sherlock Homes, Star Trek, and James Bond franchises. He also wrote the screenplay for Time After Time (1979), which is about--of course!--H.G. Wells in his pursuit of Jack the Ripper across time.

Sherlock Holmes has also gone up against Jack the Ripper in this or that pastiche. So did Captain Kirk, believe it or not, in the Star Trek episode "Wolf in the Fold" (1967), written by Robert Bloch (1917-1994) and based, I think, on his earlier story "Yours Truly, Jack the Ripper," originally in Weird Tales in July 1943. As for James Bond--well, there's still time.

These are not lines. They are circles. 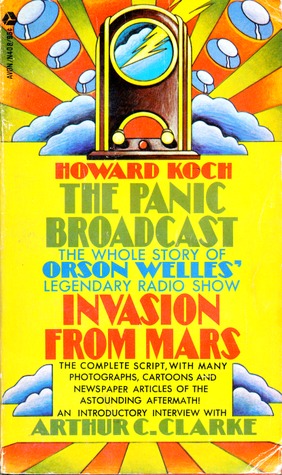