Tell Us, Great Encyclopedia, Why and How!

I have one more possible innovation in Robert A. Heinlein's novel Beyond This Horizon (1942). I'll begin with a quote from the Signet edition (no date, p. 125). It concerns an ongoing project in the book called the Great Research, which has within it several major subsidiary projects . . .

The distribution of life through the physical universe, for example, and the possibility that other, nonhuman intelligences existed somewhere. If there were such, then it was possible, with an extremely high degree of mathematical probability, that some of them, at least, were more advanced than men. In which case they might give Man a "leg up" in his philosophical education. They might have discovered "Why" as well as "How."

Those words were written nearly eighty years ago, and yet the idea is alive today: a full faith that there are intelligences superior to ours in the universe and that these intelligences have discovered--or at least might know something about--the nature, purpose, and meaning of the universe. I think that by extension a superior intelligence would also know about the nature, purpose, and meaning of human (or sentient) existence. I'm not sure that Heinlein took the next step, though, which is that we, because we are not superior intelligences, are not able to figure these things out for ourselves; that we might actually be a danger to ourselves because we are not able to figure them out; and that if we don't reach these extraterrestrial intelligences (ETI) and learn from them, we might only destroy ourselves. There may have been a writer and thinker of the next generation, though, who took that step.

Not long before I read Beyond This Horizon, I came across an article in a magazine I had never heard of before. The magazine is called Salvo and it's published by The Fellowship of St. James. The article is "ETI in the Sky: What the Search for Extraterrestrial Intelligence Life Means for Us," and it's by Hugh Ross (Spring 2016, pp. 34-37). I remembered Dr. Ross' article as I was reading Heinlein's novel because of the subject of the article, which is Carl Sagan and the search for extraterrestrial intelligence (SETI) to which Sagan devoted so much of his career and which has continued since the 1960s.

Hugh Ross was a graduate student at the University of Toronto during the latter part of that decade when he took a summer course taught by Dr. Sagan. SETI came up in discussions in and out of class. It was one of Sagan's driving passions at the time of course. Mr. Ross writes:

Sagan finished the course by listing over a dozen currently existing problems on earth that could bring about the end of human civilization. He then pointed out that the nations of the world had failed to develop, or even propose, a single viable solution to even one of the problems on his list. Therefore, he asserted, mankind's only hope was to get counsel from an ETI civilization far more advanced than ours. Such a civilization, he was sure, would have produced something on the order of an Encyclopedia Galactica, which--as he was also confident that the civilization must be benevolent--it would be motivated to broadcast to beleaguered planets like ours. (p. 35)

I have always liked and admired Carl Sagan, but he, like anyone, had his shortcomings. One is here on display: a lack of faith and confidence in humanity and in our ability to solve our own problems. Instead, he placed his faith in a purely hypothetical intelligence residing somewhere else in the universe. Sagan seemed to be saying, There is where our salvation lies--mine, too.

That idea seems to me utopian in its way: somewhere out there is perfection, or something like it. It may also be related to Heinlein's concept of the superior man. More than that, though, I think that it's an essentially religious idea, one perhaps specially made for scientists, materialists, and, yes, atheists. There are still those among us who yearn--so yearn, the way a child yearns for a pony--to come into contact with those superior intelligences, to learn from them, perhaps most importantly of all, to draw from their existence the meaning and purpose of our own. I sense that yearning among astronomers, astrophysicists, and others whenever I read about their efforts. So many of them seem to have an emptiness inside of them which they are not willing to fill with anything we might know or believe here on earth. It also seems to me that they seek spiritual salvation by material means. What they may not be considering--what they cannot even countenance--is the possibility that there are no other intelligent species in the universe, or that if there are, that we may be, as C.S. Lewis posited, under quarantine for our "bent" nature, and may not reach them. (1)

Carl Sagan was not only an astronomer, astrophysicist, and planetologist, he was also an author, including of science fiction. He of course wrote the novel Contact (1985) and co-wrote the story for the film version. I have written about Contact before. I mean to circle back to it, pun or no pun intended. The movie is one thing. The book is another. I'm not sure that many people realize that it closes with the very strong implication that the universe is a product of design.

Carl Sagan (1934-1996) was younger by a generation than Robert Heinlein (1907-1988). He was born during a decade of science fiction, the same decade in which Heinlein had his first story published ("Life-Line" in Astounding Science-Fiction, Aug. 1939). Even as a child, Sagan had a science-fiction imagination. When he was ten, a friend introduced him to the Mars novels of Edgar Rice Burroughs. At age twelve--what we know to be the golden age of science fiction--he discovered Astounding Science-Fiction, a magazine for sale in a local candy store. "With some effort," Sagan remembered, "I managed to scrape together the purchase price, opened the magazine at random, sat down on a bench not 20 feet from the store and read my first modern science-fiction short story, Pete Can Fix It by Raymond F. Jones, a gentle account of time travel into a post-nuclear holocaust." (2, 3) Sagan's interest in science fiction continued into his college years. While at the University of Chicago in the mid 1950s, he was president of the Astronomical Society and a member (or president?) of the Science Fiction Club. His yearbook picture from his graduation year, 1954, appears below. 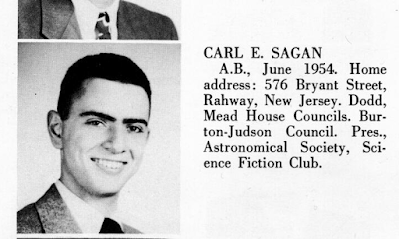 So did Carl Sagan come across the idea of superior intelligences from which we might learn to save ourselves in the writings of Robert Heinlein? Or did he develop it on his own? I'm not sure that it really matters. The idea was there, and it seems to have shaped his thinking not just for a time but perhaps throughout his life. In SETI, Carl Sagan went looking in the library of the universe for an Encyclopedia Galactica. Unfortunately the librarians were out to lunch.

Like Sagan, Hugh Ross believes that "our only hope is to take counsel from the Encyclopedia Galactica." Unlike Sagan, he writes: "It seems that we really are alone." Dr. Ross concludes his article with these words:

When Sagan waxed eloquent about the great text during the course he taught at the University of Toronto, I nudged some of my fellow students and commented, "Don't we already have an Encyclopedia Galactica? And it isn't Carl's problem that he refuses to read it?" They all knew, of course, that I was referring to the Bible." (p. 37)

That is Hugh Ross' take on the idea. I won't call it my own. What I will say, though, is that I think we already have in us what we need if we are going to solve our own earthly problems. We don't need people from other planets to do these things for us. And I think it's a pretty risky thing to place our chances at salvation on people who may not even exist, or if they do, on people we might never know.

(1) And before you say that it is almost an impossibility that we are the only intelligent species in the universe, please provide your evidence, mathematical or otherwise, that we are not.

(3) "Pete Can Fix It" by Raymond F. Jones was in Astounding Science-Fiction in the issue of February 1947. Sagan had turned twelve in November 1946. In his article, "The Real Sci-Fi Freaks Should Read," he seems to have had his timing mixed up, as he wrote that he had encountered Jones' story during a summer when he was presumably eleven years old.